Rediscovering Travel: A Guide for the Globally Curious (Hardcover) 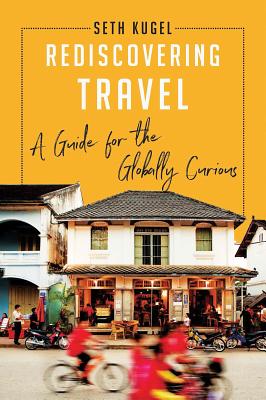 Rediscovering Travel: A Guide for the Globally Curious (Hardcover)

An indispensable companion for rookie and veteran travelers alike that promises to revolutionize both how and why we vacation.

By captivating millions during his six-year, fifty-country tenure as the New York Times’s “Frugal Traveler,” Seth Kugel has become one of our most internationally beloved travel writers. While his famously unassuming journeys around the globe have forged a signature philosophy of whimsy and practicality, they have also revealed the seemingly infinite booby traps of on-the-grid tourism. In a book with widespread cultural reverberations, Kugel takes the modern travel industry to task, determined to reignite humanity’s age-old sense of adventure that has virtually been vanquished by the spontaneity-obliterating likes of Google Maps, TripAdvisor, and Starwood points. Woven throughout with vivid tales of his perfectly imperfect adventures, Rediscovering Travel explains—often hilariously—how to make the most of new digital technologies without being shackled to them. For the tight-belted tourist and the first-class flyer, the eager student and the comfort-seeking retiree, Kugel shows how we too can rediscover the joy of discovery.

Seth Kugel, the New York Times’s “Frugal Traveler” from 2010 to 2016, has appeared on CBS This Morning, NPR, and BBC Travel. He hosts the hit YouTube channel “Amigo Gringo,” which has been profiled in The New Yorker, and lives in New York.
Rediscovering Travel sets itself apart by making the 'case that low-budget, minimally planned travel can be more rewarding than a journey insulated from risk and serendipity.' The author spent years as the 'Frugal Traveler' columnist for the New York Times, so many of his anecdotes and suggestions are unmatched in both functionality and entertainment value. Indeed, 'travelers both timid and daring will find plenty of useful advice in this perceptive and provocative volume.

Covering topics including the reasons why we travel, safety and risks, effective technology use, and the ethics of travel, he writes for both families with one week of vacation per year and solo travelers with months to spend abroad. Kugel’s sense of humor and varied experiences make the book an enjoyable, informative read. Whether their ideal vacation is a week on a Caribbean beach or two months motorbiking around Vietnam, readers will feel encouraged to reconsider how they approach their next trip away from home.
— Booklist

In this insightful and fun book, Kugel… takes on the increasingly commercial and technological aspects of 21st-century travel. His advice will stimulate travelers' curiosity while rescuing a sense of adventure that has been eclipsed by technology and corporate tourism… Kugel's advice for discovery-filled travel is thought-provoking and surprisingly simple.
— Publishers Weekly