Homeward: Life in the Year After Prison (Paperback) 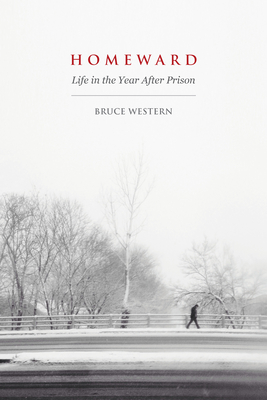 Homeward: Life in the Year After Prison (Paperback)


Not on our shelves. Usually ships in 2-5 days.
In the era of mass incarceration, over 600,000 people are released from federal or state prison each year, with many returning to chaotic living environments rife with violence. In these circumstances, how do former prisoners navigate reentering society? In Homeward, sociologist Bruce Western examines the tumultuous first year after release from prison. Drawing from in-depth interviews with over one hundred individuals, he describes the lives of the formerly incarcerated and demonstrates how poverty, racial inequality, and failures of social support trap many in a cycle of vulnerability despite their efforts to rejoin society.

Western and his research team conducted comprehensive interviews with men and women released from the Massachusetts state prison system who returned to neighborhoods around Boston. Western finds that for most, leaving prison is associated with acute material hardship. In the first year after prison, most respondents could not afford their own housing and relied on family support and government programs, with half living in deep poverty. Many struggled with chronic pain, mental illnesses, or addiction—the most important predictor of recidivism. Most respondents were also unemployed.  Some older white men found union jobs in the construction industry through their social networks, but many others, particularly those who were black or Latino, were unable to obtain full-time work due to few social connections to good jobs, discrimination, and lack of credentials. Violence was common in their lives, and often preceded their incarceration. In contrast to the stereotype of tough criminals preying upon helpless citizens, Western shows that many former prisoners were themselves subject to lifetimes of violence and abuse and encountered more violence after leaving prison, blurring the line between victims and perpetrators.

Western concludes that boosting the social integration of former prisoners is key to both ameliorating deep disadvantage and strengthening public safety. He advocates policies that increase assistance to those in their first year after prison, including guaranteed housing and health care, drug treatment, and transitional employment. By foregrounding the stories of people struggling against the odds to exit the criminal justice system, Homeward shows how overhauling the process of prisoner reentry and rethinking the foundations of justice policy could address the harms of mass incarceration.

Bruce Western is professor of sociology at Harvard University.

“Bruce Western, our foremost authority on mass incarceration, has filled in a yawning gap in the research on one of the great banes of our era. Homeward is a thorough and deeply illuminating study on the end-point of mass incarceration—the effort to reintegrate ex-offenders into our society. The challenges outlined in the book should not simply inform our reentry efforts, but should also make us question the American policy of handing down sentences, which, in some profound way, never really end.”

“In Homeward, Bruce Western probes in rich detail the lives of ex-prisoners in their first year of life back on the streets of Boston. He looks unflinchingly at the correlated web of adversities that men and women face in the transition out of prison, especially how violence, drug and alcohol addiction, mental illness, and family chaos exacerbate the stigma of a prison record in the reentry to society.  Beautifully written and deeply researched, this book provides an important framework on social and criminal justice.  The implications for policy are profound.”