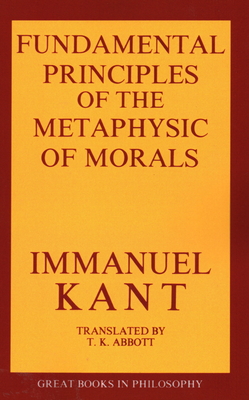 
Not on our shelves. Usually ships in 2-5 days.
The nature and theoretical underpinnings of ethics have been an intellectual driving force animating the pursuits of great scholars. In The Fundamental Principles of the Metaphysic of Morals (1785) Immanuel Kant, one of the most powerful philosophical minds of the eighteenth and nineteenth centuries, inquires into the true nature of morality.

In rejecting the results or consequences of action as the foundation of moral judgments, he denies that good or bad effects have any relevance in the moral evaluation of human behavior. Instead, we must rely upon the Good Will for guidance. What is this Will upon which so much emphasis is placed, and how does it act as the foundation for behavior that can be assessed as truly moral? In this groundbreaking work, Kant outlines an ethical perspective that has been a vital force in the Western world.
IMMANUEL KANT, born in Königsberg, East Prussia (in what is now Kaliningrad, Russia), on April 22, 1724, was reared by parents who were members of the Lutheran sect known as Pietists. Though his upbringing was religious, Kant did not find himself subjected to a dogmatic or doctrinaire home environment. After completing his early education at the Collegium Fridericianum, he entered the University of Königsberg in 1740 at the age of sixteen. Though it was originally thought that he would make the ministry his life’s pursuit, Kant took the minimum number of required courses in theology and then dedicated himself to philosophy, mathematics, and physical science. During the years between 1746 and 1755 he worked as a private tutor in an effort to support himself through graduate work after the death of his parents left him without financial assistance. Receiving his doctorate in 1755, he taught at the University of Königsberg for fifteen years until 1770 when he was finally promoted to Professor of Logic and Metaphysics. Kant held this position until his death on February 12, 1804.

Among Kant’s most important philosophical works are: The Critique of Pure Reason (1781), Prolegomena to Any Future Metaphysics (1783), Idea for a Universal History (1784), Fundamental Principles of the Metaphysic of Morals (1785), Metaphysical Foundations of Natural Science (1786), Critique of Practical Reason (1787), Critique of Judgment (1790), Religion within the Limits of Reason Alone (1793), Perpetual Peace (1795), Metaphysics of Ethics (1797), and Anthropology from a Pragmatic Point of View (1798).