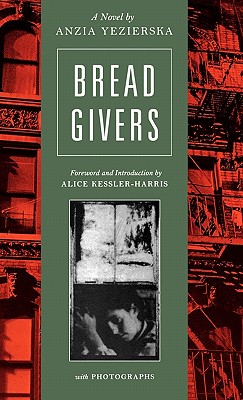 The classic novel of Jewish immigrants, with period photographs.

This masterwork of American immigrant literature is set in the 1920s on the Lower East Side of Manhattan and tells the story of Sara Smolinsky, the youngest daughter of an Orthodox rabbi, who rebels against her father's rigid conception of Jewish womanhood. Sarah's struggle towards independence and self-fulfillment resonates with a passion all can share. Beautifully redesigned page for page with the previous editions, Bread Givers is an essential historical work with enduring relevance.

Anzia Yezierska was born in Poland and emigrated with her family to the Jewish Lower East Side of New York City in 1890 when she was nine years old.  By the 1920s she had risen out of poverty and become a successful writer of stories, novels—all autobiographical—and a semi-fictional autobiography, Red Ribbon on a White Horse (Persea). Her novel Bread Givers (Persea) is considered a classic of Jewish American fiction and has sold many hundreds of thousands of copies since its reissue in 1975.  Persea also publishes How I Found America: Collected Stories and The Open Cage: An Anzia Yezierska Collection (a selection of stories, excerpts from Red Ribbon on a White Horse, and uncollected stories on old age).   Yezierska died in 1970.