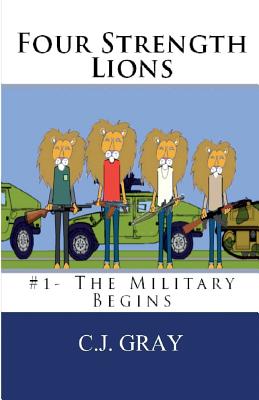 This is book number 1 in the Four Strength Lions series.

Four Strength Lions is a science fiction action-adventure book series for kids and teens. Recommended for ages 9-18. Four Strength Lions Book #1, The Military Begins is a story about the adventures of four teenage lions as they fight against Danny, the raging lion. Many years ago, Danny blamed their Uncle Alex for not joining him, after an event that ended up sending him to prison. Now, Danny has returned and vows to seek vengeance against Alex, his nephews, and the city that ruined his life. In an attempt to destroy buildings, bridges, and vehicles, Danny unleashes a squid war all over the city. Captain Flint enlists the four lions on his military team to fight and save the people from destruction. Midnight - Leader of the four lions.
Peter - Strongest of the four lions.
Alan - Fastest runner and master gamer.
James - Peacemaker and master of foreign languages. Review: "From a narrative point of view, the book is fun. The story is engaging and exciting with several humorous exchanges about how lions could walk and talk like humans. It's a wonderful first novel." - RK.