The Sins of the Father (The Clifton Chronicles #2) (Mass Market) 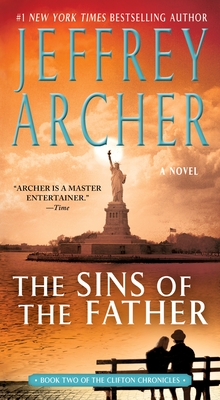 The Sins of the Father (The Clifton Chronicles #2) (Mass Market)

This is book number 2 in the The Clifton Chronicles series.

From the author of the international bestseller Only Time Will Tell, Jeffrey Archer picks up the sweeping story of the Clifton Chronicles with The Sins of the Father.

It is only days before Britain declares war on Germany. Harry Clifton, hoping to escape the consequences of a family scandal, and realizing he can never marry Emma Barrington, has joined the Merchant Navy. When a German U-boat sinks his ship, Harry and a handful of sailors are rescued by the SS Kansas Star, among them an American named Tom Bradshaw. That night, when Bradshaw dies, Harry seizes a chance to bury his past—by assuming the man's identity.

This edition of the book is the deluxe, tall rack mass market paperback.

JEFFREY ARCHER was educated at Oxford University. He served five years as a Member of Parliament in the House of Commons and has served twenty-seven years as a Member of the House of Lords. Now published in 97 countries and more than 37 languages, all of his novels and short story collections—including Kane & Abel, Only Time Will Tell and This Was a Man—have been international bestsellers. Jeffrey is married with two sons and three grandchildren, and lives in London, Cambridge and Majorca.
"The sterling tale is complex and packed with well-developed characters."—Kirkus Reviews