Endzone: The Rise, Fall, and Return of Michigan Football (Paperback) 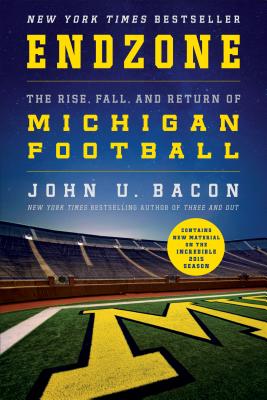 Endzone: The Rise, Fall, and Return of Michigan Football (Paperback)

The New York Times bestseller Endzone tells the story of how one of college football's most successful, richest and respected programs, the University of Michigan, almost lost it all in less than a decade--and entirely of its own doing.

It is a story of hubris, greed, and betrayal--a tale more suited to Wall Street than the world's top public university.

Author John U. Bacon takes you inside the offices, the board rooms and the locker rooms of the University of Michigan to see what happened, and why--with countless eye-opening, head-shaking scenes of conflict and conquest.

But Endzone is also an inspiring story of redemption and revival. When those who loved Michigan football the most recognized it was being attacked from within, they rallied to reclaim the values that made it great for over a century--values that went deeper than dollars. The list of heroes includes players, students, lettermen, fans and faculty--and the leaders who had the courage to listen to them.

Their unprecedented uprising produced a new athletic director, and a new coach--the hottest in the land--who vindicated the fans' faith when he turned down more money and fame to return to the place he loved most: Michigan.

If you love a good story, you'll want to dive into Endzone: The Rise, Fall and Return of Michigan Football.

John U. Bacon has written for The Wall Street Journal, Time magazine, The New York Times, and ESPN Magazine, among other publications, earning national honors. He is the author of several books on sports and business, including the New York Times bestsellers, Three and Out and Fourth and Long. Bacon is also a popular public speaker.

"This is an obvious must-read for University of Michigan fans but is also recommended to anyone interested in college sports, university administration, and organizational leadership." - Library Journal

"John Bacon is deservedly regarded as the poet laureate of Michigan Football, but his writing is essential to anyone who wants to understand how Big Time College Sports works and why it is stuck in hearts even when it makes us crazy." —Joe Drape, author of New York Times Bestseller Our Boys: A Perfect Season on the Plains with the Smith Center Redmen

“No person is more qualified to tell the story of the milestones and missteps in Michigan's football programs than John Bacon, who has the sources, relationships and storytelling mastery to pull back the curtain at an institution where the curtain is thick. ENDZONE provides a fascinating view into a powerful and successful program that, for a while, lost its way.” —Joe Schad, ESPN College Football Insider

“John Bacon has fast become the preeminent documentarian of all things Michigan football and this is just the latest in a long line of must-read material.” —Rich Eisen, Lead Host, NFL Network, author, Total Access

“Jim Harbaugh always has been one of the most intriguing figures in all of football, the NFL or college.ENDZONE brings them together, helping to understand what motivated Harbaugh to leave the successful San Francisco 49ers for the struggling Michigan Wolverines, and why Michigan fans have received him as their savior.” —Adam Schefter, ESPN NFL Insider

“More than just the story of how Jim Harbaugh came home to Ann Arbor, Endzone takes readers deep inside one of college football's most storied programs at a critical moment of uncertainty and tumult. Bacon's incisive reporting reveals details even die-hard fans couldn't know about what went wrong with Michigan football and who emerged to fix it.” —Stephen Henderson, Detroit Free Press columnist and editorial page editor, Pulitzer winner for commentary, and U-M class of '92

The lasting lesson of Endzone is that one man can't do anything, but many can. It teaches that loyalty out of love is greater than loyalty out of fear and that either is a weak substitute for morality. It teaches that candor is virtue, that authenticity is recognizable, and that a person or a program's aspirations are every bit as important as their accomplishments.” —Seth Fisher, MGoBlog