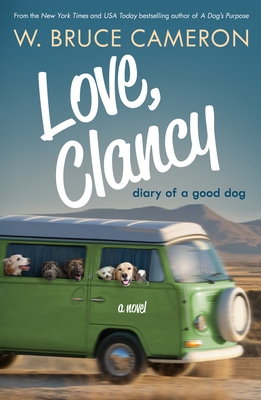 From W. Bruce Cameron, the internationally bestselling author of A Dog’s Purpose and A Dog’s Way Home, comes Love, Clancy: Diary of a Good Dog, a deeply moving story with a brand-new cast of characters, including one very good dog.

You’ve probably never met someone like Clancy. He’s keeping a diary, he’s falling in love, there are rivals for his affections, he lives with his best friend and his worst enemy – even taken together, these factors are maybe not that unusual, except that Clancy is a dog. His point of view is therefore perhaps…different.

Told in Cameron’s signature style, a tremendous cast of wonderful characters find themselves jointly and separately navigating the challenges of life, of love, and…other pets, including Clancy's “worst enemy” - one very disdainful cat. It’s a lot to keep track of, especially when things start to spin hilariously out of control, but fortunately, we’ve got the observations of Clancy, a very good dog, who shares a valuable perspective on what is really important.

FROM FORGE:
THE DOG'S PURPOSE SERIES:
A Dog's Purpose / A Dog's Journey / A Dog's Promise

W. BRUCE CAMERON is the #1 New York Times and USA Today bestselling author of A Dog's Purpose, A Dog's Way Home, and A Dog's Journey (all now major motion pictures), The Dog Master, A Dog's Promise, the Puppy Tales for young readers (starting with Ellie's Story and Bailey's Story), The Dogs of Christmas, The Midnight Plan of the Repo Man, and others. He lives in California.

Praise for W. Bruce Cameron:
“Another winning tale of an extraordinary human-canine companionship full of tug-at-the-heartstrings adventure.” —Booklist on A Dog’s Way Home

“Marley & Me combined with Tuesdays with Morrie.” —Kirkus Reviews on A Dog's Purpose