Molly: The True Story of the Dog Who Rescues Lost Cats (Hardcover) 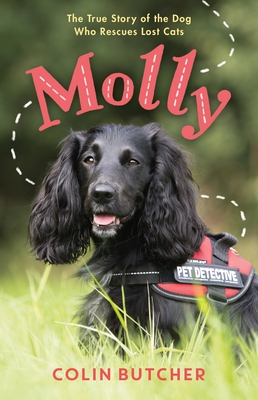 Molly: The True Story of the Dog Who Rescues Lost Cats (Hardcover)

In Colin Butcher and Joanne Lake's Molly: The True Story of the Dog Who Rescues Lost Cats, a rescue dog meets a retired police detective and they help find lost or stolen animals in this nonfiction middle grade adaptation.

As a veteran of the Royal Navy and longtime police officer, Colin Butcher was no stranger to dangerous situations and challenges. Colin left the force to start his own private detective agency, specializing in helping reunite people with their lost pets. He soon knew he needed a partner.

When Colin first met Molly, his friends doubted that she would be up for the job. Where Colin was battle-tested after a long and varied career, Molly was young and inexperienced. Not only that, she had a reputation for bad behavior. But Colin could tell that Molly was unusually charismatic and intelligent. Today, Molly has overcome all the odds to become Colin’s invaluable deputy. Together, they are unstoppable—even if Molly still occasionally steals food from people’s plates.

Molly is no ordinary deputy, but a black Cocker Spaniel, and this is no ordinary detective agency. Colin and Molly are the man-and-dog team behind “The UK Pet Detective Agency,” and they are the Sherlock and Watson for finding people’s lost pets.

Colin Butcher is the Company Director and Chief Investigator of the UKPD. Previously a Detective Inspector in Surrey Police, and a veteran of the Royal Navy, Colin was awarded a prestigious Chief Constables Commendation for his contributions to the advancement of the Criminal Investigation Department. He has been recovering stolen and missing pets for over twenty years and has a wealth of experience in the investigation of pet crime. His first successful assignment was back in 1994 when, serving as a Detective Sergeant with Surrey Police, he recovered two German Shepherd puppies stolen from a breeder’s kennels. Molly: The True Story of the Amazing Dog Who Rescues Cats is his first book.