The Twice-Born: Life and Death on the Ganges (Paperback) 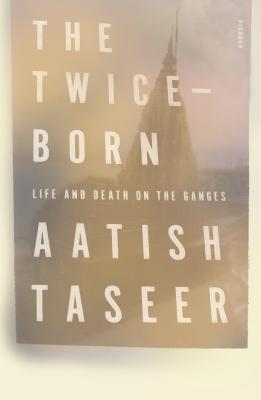 The Twice-Born: Life and Death on the Ganges (Paperback)

In The Twice-Born, Aatish Taseer embarks on a journey of self-discovery in an intoxicating, unsettling personal reckoning with modern India, where ancient customs collide with the contemporary politics of revivalism and revenge

When Aatish Taseer first came to Benares, the spiritual capital of Hinduism, he was eighteen, the Westernized child of an Indian journalist and a Pakistani politician, raised among the intellectual and cultural elite of New Delhi. Nearly two decades later, Taseer leaves his life in Manhattan to go in search of the Brahmins, wanting to understand his own estrangement from India through their ties to tradition.

Known as the twice-born—first into the flesh, and again when initiated into their vocation—the Brahmins are a caste devoted to sacred learning. But what Taseer finds in Benares, the holy city of death also known as Varanasi, is a window on an India as internally fractured as his own continent-bridging identity. At every turn, the seductive, homogenizing force of modernity collides with the insistent presence of the past. In a globalized world, to be modern is to renounce India—and yet the tide of nationalism is rising, heralded by cries of “Victory to Mother India!” and an outbreak of anti-Muslim violence.

From the narrow streets of the temple town to a Modi rally in Delhi, among the blossoming cotton trees and the bathers and burning corpses of the Ganges, Taseer struggles to reconcile magic with reason, faith in tradition with hope for the future and the brutalities of the caste system, all the while challenging his own myths about himself, his past, and his countries old and new.

Aatish Taseer was born in 1980. He is the author of the memoir Stranger to History: A Son’s Journey Through Islamic Lands and the acclaimed novels: The Way Things Were, a finalist for the 2016 Jan Michalski Prize; The Temple-Goers, which was short-listed for the Costa First Novel Award; and Noon. His work has been translated into more than a dozen languages. He is a contributing writer for The International New York Times and lives in New Delhi and New York.

"[The Twice-Born] doesn’t sit squarely in the camp of memoir, travelogue, or long-form reportage. It hovers among the three—but with such lilting grace as to make that limbo feel like a lovely hybrid . . . Taseer grew up in cosmopolitan, postcolonial New Delhi but has spent much of his adult life in the U.S. and Europe.” —Chloe Malle, Vogue

"A detailed, learned and highly readable tour of Hindu history . . . [and] a sharp-eyed condemnation of the evils of Hindu nationalism and caste." —Wendy Doniger, The New York Times Book Review

"Moving . . . For Taseer, Benares incarnates a curious quality of modernity: the city makes anthropologists of the devout and believers of the skeptical. The book’s charm resides in the way the author orbits this tension between faith and rationality." —Shaj Mathew, The New Yorker

“Superb. Anyone wishing to understand the rise of the right—in India, but also elsewhere—should read this brilliant, disquieting, personal book.” —Karan Mahajan, author of The Association of Small Bombs

"In The Twice Born, a beautifully written portrait of the Brahmins of Benares, Aatish Taseer takes us on a journey of exploration through the strange and unsettling city that is the spiritual center of Hinduism. Full of profound insights about the stubborn hold of caste and tradition on the Indian psyche and the deep resentments that fester beneath the surface of modern India, this compelling book is a must read for anyone trying to understand the resurgence of Hindu nationalism in India." —Liaquat Ahamed, author of Lords of Finance, winner of the Pulitzer Prize

"The Twice-Born is a book of portraits, in which the testaments of Brahmins tell of an unresolved dispute between tradition and modernity. Every encounter here is a story of wonderment and disillusionment, of pursuit and remoteness, of contentment and suppression, and mixed rewards are inevitable, for Benares, as [Taseer] discovers, is the enigma of the elevated mind . . . The most rewarding [book] written by a contemporary writer on the perpetually romanced—and sacred—geography of India." —S. Prasannarajan, Open

"Taseer writes like he always does, relentlessly, intensely, sometimes unkindly, in a complex way, raising questions with a deep intelligence that disturbs more than it quietens." —Chandrima S. Bhattacharya, The Telegraph (Calcutta)

“[Taseer] draws the reader to look at the world through the eyes of a series of unsympathetic but unswerving characters . . . Taseer’s talent lies in his ability to bestow on the reader this temporary gift of double vision even as his own sense of outrage is never in doubt . . . The Twice-Born makes the reader think about religion, caste, culture and the idea of modernity, and most rewardingly, about where she stands in relation to all of these.” —Manjula Narayan, Hindustan Times

"I love Aatish Taseer’s writing: his introspection, his lucid and supple prose, his sensitivity to the interplay of tradition and modernity, East and West, old and new India. The Twice-Born is a poignant reflection on identity, change and politics on the banks of the Ganges. A moving and thought-provoking read." —Shashi Tharoor, author of Inglorious Empire and Why I Am a Hindu