Profit and Punishment: How America Criminalizes the Poor in the Name of Justice (Hardcover) 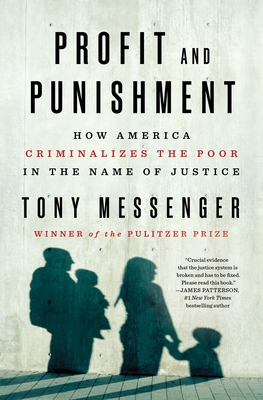 Profit and Punishment: How America Criminalizes the Poor in the Name of Justice (Hardcover)

In Profit and Punishment, a Pulitzer Prize-winning journalist exposes the tragedy of modern-day debtors prisons, and how they destroy the lives of poor Americans swept up in a system designed to penalize the most impoverished.

“Intimate, raw, and utterly scathing” — Heather Ann Thompson, Pulitzer Prize-winning author of Blood in the Water
“Crucial evidence that the justice system is broken and has to be fixed. Please read this book.” —James Patterson, #1 New York Times bestselling author

As a columnist for the St. Louis Post-Dispatch, Tony Messenger has spent years in county and municipal courthouses documenting how poor Americans are convicted of minor crimes and then saddled with exorbitant fines and fees. If they are unable to pay, they are often sent to prison, where they are then charged a pay-to-stay bill, in a cycle that soon creates a mountain of debt that can take years to pay off. These insidious penalties are used to raise money for broken local and state budgets, often overseen by for-profit companies, and it is one of the central issues of the criminal justice reform movement.

In the tradition of Evicted and The New Jim Crow, Messenger has written a call to arms, shining a light on a two-tiered system invisible to most Americans. He introduces readers to three single mothers caught up in this system: living in poverty in Missouri, Oklahoma, and South Carolina, whose lives are upended when minor offenses become monumental financial and personal catastrophes. As these women struggle to clear their debt and move on with their lives, readers meet the dogged civil rights advocates and lawmakers fighting by their side to create a more equitable and fair court of justice. In this remarkable feat of reporting, Tony Messenger exposes injustice that is agonizing and infuriating in its mundane cruelty, as he champions the rights and dignity of some of the most vulnerable Americans.

Tony Messenger is the metro columnist for the St. Louis Post-Dispatch. In 2019, Messenger won the Pulitzer Prize for commentary for his series of columns on debtors' prisons in Missouri. In 2016, Messenger was awarded a Missouri Honor Medal, the highest award bestowed by the University of Missouri's School of Journalism. That same year he won a National Headliner for editorial writing. In 2015, Messenger was a Pulitzer finalist for his series of editorials on Ferguson, and won the Sigma Delta Chi award for best editorials of the year, given by the Society of Professional Journalists. Messenger lives in Wildwood, MO with his wife and two children. He has four grown children and eight grandchildren. Profit and Punishment is his first book.

“Every once in a while there is a voice calling out in the wilderness to draw attention to a particular social injustice. And every once in a while, perhaps because of the righteousness and eloquence of that voice, the message is heard. Profit and Punishment epitomizes that voice.”
—The Washington Post

"Journalist and first-time author... Messenger persuasively, passionately exposes these injustices and their devastating consequences, points to recent bipartisan reform efforts, and calls for nationwide dismantling of this system of profit over justice. His book merits a wide readership among policymakers, legal practitioners, students, and general audiences.”
—Library Journal

“The billowing corruption Messenger describes in Profit and Punishment feels like Charles Dickens’ Bleak House, and the comically swollen state bureaucracies he portrays are reminiscent of Catch 22…. A must-read for anyone who wants a readable, well-documented case for state justice system reform.”
—Aaron Belz, St. Louis Post-Dispatch

"One of the few columnists—maybe the only one—in America whose beat is the poor who are preyed upon by public officials."
—St. Louise Magazine

“With the keen eye and compassionate heart of an award-winning journalist, Messenger shows us that Ferguson is everywhere, putting a human face on the millions of Americans being crushed every year by cash register injustice.”
—Jeffrey Selbin, Chancellor’s Clinical Professor of Law

"Timely and important... should enrage anyone who comes to understand it—and Profit and Punishment is the perfect place to start that understanding."
—Shelf Awareness

"An eye-opening, relevant, and heartbreaking account on the epidemic of criminalized poverty.”
—Kirkus

“Explores the byzantine paths of so-called justice… Profit and Punishment is persuasive and enraging, a book that will stir readers from both sides of the aisle to support reform.”
—Booklist

“A heartbreaking study of how the American justice system is weighted against the poor. … Interweaving hard evidence with harrowing firsthand stories, this is a powerful call for change.”
—Publishers Weekly

"A shocking account... In plainspoken and powerful language, Messenger exposes the unconscionable, unethical and utterly heartbreaking. Read these riveting accounts and be stirred to action!"
—Keeanga-Yamahtta Taylor, Pulitzer Prize Finalist, author of Race for Profit

"Tony Messenger's Pulitzer Prize-winning series on debtors' prisons in Missouri made a serious difference in real people's lives and his book will be a must read for a nation seeking a bipartisan path forward on criminal justice reform."
—Claire McCaskill, former US Senator and analyst for MSNBC

“An intimate, raw, and utterly scathing look at the ordinary and everyday ways in which America's criminal justice system has directly increased the poverty of the many, and dramatically increased the profits of the few, in recent years. All will have zero doubt after reading this devastating account of the full scale human rights crisis that has been wrought by these policies that they must act, immediately, to overhaul them."
—Heather Ann Thompson, Pulitzer Prize-winning author of Blood in the Water