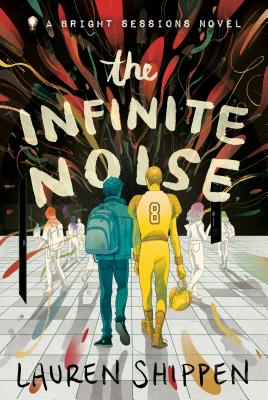 This is book number 1 in the The Bright Sessions series.

Lauren Shippen's The Infinite Noise is a stunning, original debut novel based on her wildly popular and award-winning podcast The Bright Sessions.

Caleb Michaels is a sixteen-year-old champion running back. Other than that his life is pretty normal. But when Caleb starts experiencing mood swings that are out of the ordinary for even a teenager, his life moves beyond “typical.”

Caleb is an Atypical, an individual with enhanced abilities. Which sounds pretty cool except Caleb's ability is extreme empathy—he feels the emotions of everyone around him. Being an empath in high school would be hard enough, but Caleb's life becomes even more complicated when he keeps getting pulled into the emotional orbit of one of his classmates, Adam. Adam's feelings are big and all-consuming, but they fit together with Caleb's feelings in a way that he can't quite understand.

Caleb's therapist, Dr. Bright, encourages Caleb to explore this connection by befriending Adam. As he and Adam grow closer, Caleb learns more about his ability, himself, his therapist—who seems to know a lot more than she lets on—and just how dangerous being an Atypical can be.

“What if the X-Men, instead of becoming superheroes, decided to spend some time in therapy?” (Vox on The Bright Sessions)

LAUREN SHIPPEN, author of The Infinite Noise, is a writer best known for her work in fiction podcasts. She is the creator and sole writer of the popular audio drama, The Bright Sessions. She went on to executive produce The AM Archives and co-produce Passenger List before founding Atypical Artists, a company dedicated to audio storytelling. She wrote MARVELS, an audio adaptation of the popular comic, released in 2019 by Marvel and Stitcher. Lauren was named one of Forbes's 2018 30 Under 30 in Media and one of MovieMaker Magazine's and Austin Film Festival’s 25 Screenwriters to Watch. She was born in New York City and grew up in Bronxville, New York. She currently lives in Los Angeles but travels frequently to New York.

“Emotional and inventive, Lauren Shippen has written a queer love story for anyone who’s ever felt like an outsider. The Infinite Noise managed to make me swoon even as it broke my heart. A thoughtful and tender exploration of mental health, it will make you want to go to therapy, whether you have superpowers or not.” —Britta Lundin, Riverdale screenwriter and author of Ship It

“The Infinite Noise is a marvelous book about love, mental health, and connection. Lauren Shippen writes with a clean and honest warmth that is deeply refreshing, and her sharp representation of depression and anxiety rings true. Once I started reading The Infinite Noise, I couldn't stop; now that I've read it, my life has become a matter of waiting to get my hands on whatever Shippen creates next.” —Sarah Gailey, Hugo Award winning author of Magic for Liars

“Fans of the podcast will revel in this closer look at the lives of the characters, and readers new to the franchise will drop into this world without missing a beat. Give this to fans of the podcast, as well as readers who enjoy Becky Albertalli's Simon vs. the Homo Sapiens Agenda, Rainbow Rowell's work, and Welcome to Night Vale.” —School Library Journal

“The author gives emotions form, texture, and color, taking readers along on Adam's and Caleb's journeys while remembering that a boyfriend is not an antidote to life's supernatural—or mundane—problems.... A warm, satisfying love story with depth.” —Kirkus Reviews

"Shippen does a superb job of handling a swirl of complex emotions, ranging from subtle to fiery as the boys struggle to complete each other and share their differences." —Booklist

"This is a story that is informative, intense, and complex. It will keep young adults reading until the very end." —The Midwest Book Review

“A refreshing look at the superhero genre.” —The Advocate

“Lauren Shippen writes with empathy, honesty, and grit, painting a raw, vivid picture of found family and the fraught, complex ties that bind them.” —Mackenzi Lee, New York Times bestselling author of The Gentleman's Guide to Vice and Virtue on A Neon Darkness

“[The Bright Sessions] combines shades of The X-Files and the HBO psychotherapy drama In Treatment, plus the youthful characters of a WB drama like Roswell or Smallville, into one compulsively listenable tale.... A testament to the simple power of good storytelling.” —Vox

“Radio dramas for the podcast age often veer towards either solid writing or engrossing performances. Rare is the show that satisfies on both fronts like The Bright Sessions.... Shippen never loses sight of the impressive character work that drives the show.” —IndieWire

“Part Professor X, part Sigmund Freud, Dr. Bright has a specialty: treating 'the strange and unusual....' Start at the beginning and binge away an afternoon on Dr. Bright’s couch.” —WIRED