All We Are Saying: The Last Major Interview with John Lennon and Yoko Ono (Paperback) 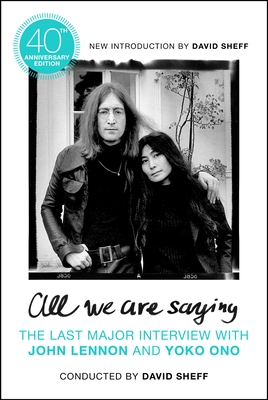 All We Are Saying: The Last Major Interview with John Lennon and Yoko Ono (Paperback)

Originally published by Playboy Press in 1981 just after John Lennon's assassination, All We Are Saying is a rich and vivid interview with Lennon and Yoko Ono, wide-ranging in its coverage of art, creativity, the music business, their extraordinary childhoods, privacy, the true story of how the Beatles broke up, how Lennon and Paul McCartney collaborated on the greatest Beatles songs, parenthood, money, feminism, religion, and insecurity. Of course, at the heart of the conversation is the deep, rare romantic and spiritual bond between Lennon and Ono.

Sympathetic and insightful questions from New York Times bestselling author David Sheff set the tone for Lennon's responses, and Sheff’s presence sets the scene, as he walks through the kitchen door of the musicians’ Dakota apartment and accompanies the famous couple to the studio, where they were recording what would turn out to be Lennon’s final albums. Sheff's new introduction looks at his forty-year-old interview afresh, and examines how what he learned from Lennon has resonated with him as a man and a parent. This is a knockout interview and a crucial piece of Beatles history: playful, intense, and inspiring.

David Sheff is the author of several books including the #1 New York Times bestselling memoir Beautiful Boy, which was turned into a movie starring Steve Carell and Timothée Chalamet. His work has appeared in The New York Times, Outside, Rolling Stone, Wired, Fortune, and elsewhere. His piece for The New York Times, “My Addicted Son,” received an award from the American Psychological Association for Outstanding Contribution to Advancing the Understanding of Addictions.