Preventable: The Inside Story of How Leadership Failures, Politics, and Selfishness Doomed the U.S. Coronavirus Response (Hardcover) 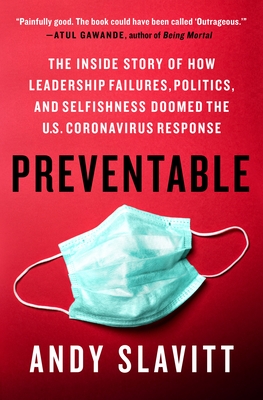 Preventable: The Inside Story of How Leadership Failures, Politics, and Selfishness Doomed the U.S. Coronavirus Response (Hardcover)

“Painfully good. The book could have been called, ‘Outrageous.’ The story Andy Slavitt tells is not just about Trump’s monumental failures but also about the deeper ones that started long before, with our health system, our politics, and more.” --Atul Gawande, author of Being Mortal

The definitive, behind-the-scenes look at the U.S. Coronavirus crisis from one of the
most recognizable and influential voices in healthcare

From former Biden Senior Advisor Andy Slavitt, Preventable is the definitive inside account of the United States' failed response to the Coronavirus pandemic. Slavitt chronicles what he saw and how much could have been prevented -- an unflinching investigation of the cultural, political, and economic drivers that led to unnecessary loss of life.

With unparalleled access to the key players throughout the government on both sides of the aisle, the principal public figures, as well as the people working on the frontline involved in fighting the virus, Slavitt brings you into the room as fateful decisions are made and focuses on the people at the center of the political system, health care system, patients, and caregivers. The story that emerges is one of a country in which -- despite the heroics of many -- bad leadership, political and cultural fractures, and an unwillingness to sustain sacrifice light a fuse that is difficult to extinguish.

Written in the tradition of The Big Short, Preventable continues Andy Slavitt’s important work of addressing the uncomfortable realities that brought America to this place. And, he puts forth the solutions that will prevent us from being here again, ensuring a better, stronger country for everyone.

ANDY SLAVITT was President Biden’s White House Senior Advisor for the Covid response at the beginning of his term where he oversaw direct communication with the public on the pandemic. He has led many of the nation’s most important health care initiatives, serving as President Obama’s head of Medicare and Medicaid and overseeing the turnaround, implementation and defense of the Affordable Care Act. Slavitt is the “outsider’s insider”, serving in leading private and non-profit roles in addition to his government services. he is founder and Board Chair Emeritus of United States of Care, a national non-profit health advocacy organization as well as a founding partner of Town Hall Ventures, a healthcare firm that invests in underrepresented communities. He co-chaired a national initiative on the future of health care at the Bipartisan Policy Center. He chronicles what goes on inside the government and across the nation at town halls, in USA Today, and on Twitter. A graduate of the University of Pennsylvania and Harvard Business School, he and his wife have two grown sons.

“Slavitt draws upon his own insider access in Preventable … It's a unique status that gave him direct access to decision-makers, who appeared to confide in him.” —The Washington Post

“[Preventable] is an informative examination of what went so horribly wrong in the federal government’s response.” --New York Times Book Review

“Ever since the pandemic began, and well before that, Andy Slavitt has been an indispensable voice of reason and urgency when it comes to America’s health. This book comes at a crucial moment as he explains, in accessible and engaging terms, how we got here and what must happen next.” —Pete Buttigieg, Former Presidential Candidate and Mayor of South Bend, Indiana

“Informative and often enraging account of ‘missed opportunit[ies]’ in the U.S. government’s handling of the Covid-19 pandemic … offers critical insights for mitigating the next public health crisis.” —Publishers Weekly

"One of the most well-connected figures in medicine and health policy... He’s become a go-to account for the daily inside scoop on where the U.S. is progressing and where it’s failing. [His Twitter thread] is also a good source of a dose of humanity — including his viral thread inviting people to share a photo and short caption that best summarizes their life in the pandemic. It will make you laugh and cry." --Elemental

“He’s not swaggery; he doesn’t come across as particularly commanding. But then leadership isn’t always blustery or elected. Slavitt is a policy wonk turned cage rattler, and in this time of pandemic, he’s emerged on Twitter and TV as one of the more straightforward, consistent sources of information, a health care administrator with a talent for getting senators and CEOs to call him back.” --The Chicago Tribune

“As CMS administrator, he was able to work across the aisle, though quietly, more than some predecessors. His pragmatic problem-solving (he dislikes the word “technocrat”) approach helped him build good ties with much of the health care industry and many governors, including those in red and purple states.” --Politico

“During his tenure at CMS, he has repeatedly proven to be an effective problem solver that engages stakeholders to craft consensus-based solutions.” --American Medical Association

“He’s as knowledgeable about health care as anyone I’ve met. He’s one of the few people that can really integrate all of the aspects.” --Bill George, former Medtronic CEO

“With decades of experience delivering health care services to millions of Americans, Andy has developed a track record as an effective and innovative leader who gets results. As acting administrator at CMS, Andy has played a crucial role in leading efforts to combat health care fraud, reform health care delivery, and improve health outcomes.” --Amy Klobuchar

“Andy pairs a deep understanding of U.S. health care with a unique ability to execute honed over years as a private-sector leader. And as the bipartisan make up of United States of Care demonstrates, Andy’s expertise is recognized by Republicans and Democrats.’’ --Denis McDonough, Former White House Chief of Staff