After the Apocalypse: America's Role in a World Transformed (American Empire Project) (Hardcover) 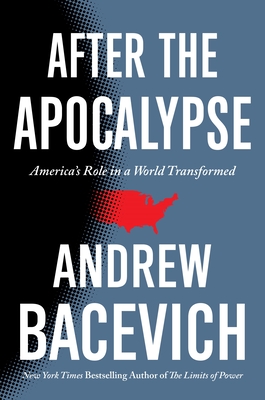 After the Apocalypse: America's Role in a World Transformed (American Empire Project) (Hardcover)

A bold and urgent perspective on how American foreign policy must change in response to the shifting world order of the twenty-first century, from the New York Times bestselling author of The Limits of Power and The Age of Illusions.

The purpose of U.S. foreign policy has, at least theoretically, been to keep Americans safe. Yet as we confront a radically changed world, it has become indisputably clear that the terms of that policy have failed. Washington’s insistence that a market economy is compatible with the common good, its faith in the idea of the “West” and its “special relationships,” its conviction that global military primacy is the key to a stable and sustainable world order—these have brought endless wars and a succession of moral and material disasters.

In a bold reconception of America’s place in the world, informed by thinking from across the political spectrum, Andrew J. Bacevich—founder and president of the Quincy Institute for Responsible Statecraft, a bipartisan Washington think tank dedicated to foreign policy—lays down a new approach—one that is based on moral pragmatism, mutual coexistence, and war as a last resort. Confronting the threats of the future—accelerating climate change, a shift in the international balance of power, and the ascendance of information technology over brute weapons of war—his vision calls for nothing less than a profound overhaul of our understanding of national security.

Crucial and provocative, After the Apocalypse sets out new principles to guide the once-but-no-longer sole superpower as it navigates a transformed world.

Andrew Bacevich grew up in Indiana, graduated from West Point and Princeton, served in the army, became a university historian, and currently serves as the president and founder of the Quincy Institute for Responsible Statecraft, a nonpartisan foreign policy thinktank. He is the author, co-author, or editor of a dozen books, among them The Limits of Power, Washington Rules, Age of Illusions, and After the Apocalypse: America’s Role in a World Transformed.

"Few critics [of the Iraq and Afghanistan Wars] have been more penetrating than Andrew Bacevich . . . One can only hope that Bacevich is read and understood by a generation young enough to see through and reject those dismal elites."
—The New York Times Book Review (Editors' Choice)

"A timely, angry, deeply necessary book about the habits of mind that have damaged America, and how to change them."
—Peter Beinart, author of The Crisis of Zionism

"In a sane country, the estimable Andrew Bacevich would be Secretary of a much-shrunken Defense Department. Deepened by his sense of history, this up-to-the-minute book is his answer to the big question: why is the most powerful nation on earth so ill-prepared to deal with the world it faces?"
—Adam Hochschild, author of Spain in Our Hearts

"The proliferating crises of our moment have found their interpreter. In this piercing account, Andrew Bacevich explains how distinctively American attributes—from our national security state to our original sin of racism to our very self-concept as the world leader—have, in the 21st century, conspired to render the American people vulnerable where they live. Bacevich points the way forward in terms that Americans across party lines are likely to appreciate. Will their leaders?"
—Stephen Wertheim, author of Tomorrow, the World: The Birth of U.S. Global Supremacy

"After the Apocalypse is a welcome act of heresy . . . that drives a central point home: America has stumbled, badly, and will complete its precipitous fall unless measures are taken to radically reform its failed and flawed relationship with itself and the world . . . A must read for any student or practitioner of American statecraft."
—Scott Ritter, former US Marine Corps intelligence officer

"An excoriating call for change . . . Bacevich's arguments are well-informed and stoked by a sense of moral outrage. Readers will agree that U.S. foreign policy needs a massive rethink."
—Publishers Weekly

"With a reputation for knowledgeable, incisive, and provocative readings of history, Bacevich delivers his latest addition to a growing body of thought-provoking work . . . Broad in its scope yet concise, this is an important nonconformist interpretation of American history."
—Kirkus Reviews

"Although Andrew Bacevich never exonerates average citizens for their contribution to current problems, he excoriates elected officials for a shortsightedness based on both non-reflection and willful self-interest in dispensing blatant lies, failed solutions, and soothing nostrums. "
—CHOICE