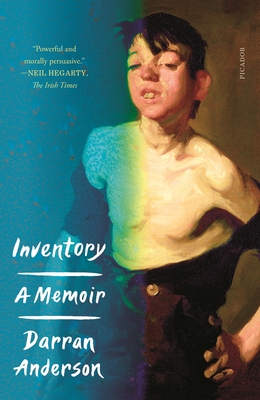 
On Our Shelves Now. Click on title for location specific availability.
(This book is nonreturnable. Nonreturnable books may take up to 3 weeks to ship. All sales final.)

"Inventory is a remarkable memoir; a work of auto-archaeology, really, in which Darran Anderson disinters his own and his country’s hard pasts, shaking life, love and loss out of the objects of his youth in Northern Ireland." --Robert Macfarlane, author of Underland: A Deep Time Journey

Inventory, Darran Anderson’s searing yet tender memoir, is an interwoven tale of political conflict, trauma, history, family, and resistance. With great rhythm, humor, and sometimes painful detail, Anderson tells the story of his city and family through the objects and memories that define them.

Growing up in Derry, Northern Ireland, amid the unspeakable violence of the Troubles, Anderson was accustomed to poverty and fracture. Avoiding British soldiers, IRA operatives, unexploded bombs, and stray bullets, he and his friends explored their hometown with boundless imagination and innocence despite their dire circumstances. But his parents and extended family, Catholics living in Protestant-controlled Northern Ireland, could not evade the persecution. His father joined the IRA, spent time in prison, and yearned to escape the hellish reality of the Troubles.

Throughout his inventive, evocative memoir, Anderson chronicles the history of Derry’s evolution from an island backwater to a crucial Allied naval base during World War II, and the diverging paths of his two grandfathers in the wake of the American military’s arrival: one, an alcoholic army deserter, drowns in the legendary River Foyle—the river that will take the life of the grandfather’s wife years later—while the other, a smuggler, lives off the river, retrieving the bodies of the drowned.

Fifteen years after leaving Derry, Anderson returns to confront the past and its legacy when yet another family member goes missing in the Foyle. In Inventory, his gripping attempt to see who, or what, he can salvage from history’s shadows, Anderson creates “a presence in the shape of an absence,” unearthing the buried fates of family, country, and self.

Darran Anderson is the author of Imaginary Cities, chosen as a best book of 2015 by the Financial Times, The Guardian, and the A.V. Club. His writing has appeared in The Atlantic, the TLS, frieze magazine, Wired, and the Architectural Review. He was born in Derry, Ireland, and lives in London.

"[Anderson has the] uncanny ability to draw image from object, to turn matter into a point of ingress into the past — so much so that you feel your own memory coming alive in tandem with his. His uncluttered, graceful prose transmits the tactile experience of his childhood while grounding it in historical context, in a way that makes the details of one’s existence seem at once specific and pointless." --David Keenan, The New York Times Book Review

“Powerful and morally persuasive . . . [Inventory] is reminiscent of a long-exposure photograph, tracking the effect of time scored through life, and place, and landscape, and the human heart.” –Neil Hegarty, The Irish Times

"A nuanced portrait of a city where everyone seems at once obsessed by the past and yet prone to historical amnesia . . . [Anderson's] chiseled, paratactic sentences, which are arranged in short, loosely connected chapters, similarly make an implicit plea for subtle parsing and interpretation rather than literal-mindedness. In Inventory, coming to terms with the past has as much to do with imagination as it does with figuring out the facts." --Max McGuinness, AirMail

"In intimate, beautifully allusive vignettes, Anderson guides readers through his youth, when he was beleaguered by the perpetual violence within his Catholic working-class neighborhood. . .Simmering violence bubbles underneath the entire text, often boiling over, and Anderson ably plumbs the salvatory theme of how his peaceable father, despite his mysterious past, helped break the cycle of violence for his son. Though different in mood and tone, this thoughtful memoir will appeal to readers of Patrick Radden Keefe’s Say Nothing, among other chronicles of the Troubles."--Kirkus Reviews

"A tense, atmospheric study of life in a war zone . . . Anderson's evocative prose takes disasters in stride while measuring their toll with restrained lyricism . . . [an] engrossing frontline take on the Troubles." --Publishers Weekly

"Inventory is a remarkable memoir; a work of auto-archaeology, really, in which Darran Anderson disinters his own and his country’s hard pasts, shaking life, love and loss out of the objects of his youth in Northern Ireland. Bleak, tender, inventive and oddly gripping, this is a book of restless ghosts, written in defiance of darkness, and told by means of diving into what Nabokov once called 'the dream life of debris'" --Robert Macfarlane, author of Underland: A Deep Time Journey

“A portrait of a family and a portrait of a city—vivid, intense, engrossing and always beautifully written.” —Kevin Barry, author of Night Boat to Tangier, longlisted for the 2019 Booker Prize

“Processed by Darran Anderson’s restless, roving intelligence and obsessive curiosity, Derry rises from the pages of this book as a place that’s at once intensely familiar and uniquely strange. Crossing the faultlines between family, history and myth, Inventory is a vivid, singular act of memory.” —Chris Power, author of Mothers: Stories

“A searing memoir about growing up in poverty in Derry.” —Lucy Caldwell, author of All the Beggars Riding