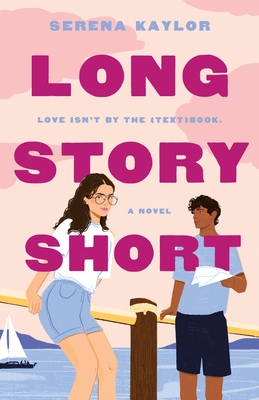 “Like the best of the Bard himself, Long Story Short combines dazzling repartee with iconic, nuanced characters and the kind of charged, perfectly paced romance fit for the world stage...a sparkling Shakespearean homage and a wonderful debut.” —Emily Wibberley and Austin Siegemund-Broka, authors of Always Never Yours

In Serena Kaylor's sparkling debut, a homeschooled math genius finds herself out of her element at a theater summer camp and learns that life—and love—can’t be lived by the (text)book.


Growing up homeschooled in Berkeley, California, Beatrice Quinn has always dreamed of discovering new mathematical challenges at Oxford University. She always thought the hardest part would be getting in, not convincing her parents to let her go. But while math has always made sense to Beatrice, making friends is a problem she hasn’t been able to solve. Before her parents will send her halfway across the world, she has to prove she won’t spend the next four years hiding in the library. The compromise: the Connecticut Shakespearean Summer Academy and a detailed list of teenage milestones to check off. If Beatrice wants to live out her Oxford dream, she has to survive six weeks in the role of “normal teenager” first.

Unfortunately, hearts and hormones don't follow any equations. When she's adopted by a group of eclectic theater kids, and immediately makes an enemy of the popular—and annoyingly gorgeous—British son of the camp’s founders, Beatrice quickly learns that relationships are trickier than calculus. With her future on the line, this girl genius stumbles through illicit parties, double dog dares, and more than her fair share of Shakespeare. But before the final curtain falls, will Beatrice realize there’s more to life than what she can find in the pages of a book?

Serena Kaylor likes to write about that first flush of summer love, whispered conversations at midnight, and endings happy enough to make your toes curl. She grew up running wild as a changeling through North Carolina swamps, and as an adult, has wandered from libraries into medicine. When she’s not writing, she can be found experimenting in her kitchen, wallpapering any blank surface, and hugging every dog that will let her. Long Story Short is her debut novel.

“[Long Story Short] has the breezy charm of a Netflix romcom and will be a hit with readers who loved The Kissing Booth or To All the Boys I’ve Loved Before adaptations.” –Bulletin of the Center for Children’s Books

"Charming repartee and plenty of heart make for a delightful debut." --Kirkus Reviews

“Recommended for fans of rom-coms with an amusing, Shakespearean twist.” –Booklist

"With characters you can't help but fall in love with, a vibrant, fun atmosphere and a stunning, tender romance at its center, Long Story Short is the perfect romantic comedy for connoisseurs of hate-to-love, fans of Pride and Prejudice, and readers who love found families. An unmissable debut from a voice to watch in the YA romantic comedy sphere!" —Sophie Gonzales, author of Perfect on Paper

“I loved this book to pieces. Delightful and charming with the familiar biting wit of a Shakespearean production, Long Story Short was the perfect read. At times I wanted to scream at Beatrice and others, I wanted to give her a big hug (or three) for being so darn relatable. Thankfully, she had a supporting cast to die for in Mia, Nolan, Shelby and *sigh* Nik who lead our heroine gently from behind the curtains to center stage in her own life.” -Erin Hahn, author of You’d Be Mine and Never Saw You Coming

“Like the best of the Bard himself, Long Story Short combines dazzling repartee with iconic, nuanced characters and the kind of charged, perfectly paced romance fit for the world stage. With incisive, unexpected takes on Romeo & Juliet, Kaylor’s is a sparkling Shakespearean homage and a wonderful debut.” —Emily Wibberley and Austin Siegemund-Broka, authors of Always Never Yours