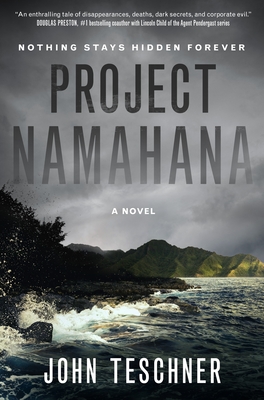 Two men, unified by a string of disappearances and deaths, search for answers—and salvation—in the jungles of Kaua‘i. Together, they must navigate the overlapping and complicated lines between a close-knit community and the hated, but economically-necessary corporate farms—and the decades old secrets that bind them.

Project Namahana takes you from Midwestern, glass-walled, corporate offices over the Pacific and across the island of Kaua‘i; from seemingly idyllic beaches and mountainous inland jungles to the face of Mount Namahana; all the while, exploring the question of how corporate executives could be responsible for evil things without, presumably, being evil themselves.

JOHN TESCHNER was born in Rhode Island and grew up in southern Virginia. He has worked as a newspaper reporter, professional mover, teacher, and nonprofit grantwriter. He served as a Peace Corps Volunteer in Kenya and rode a bike across the United States. He spent seven years living on the island of Kaua‘i with his wife and two boys, where he helped lead Hui O Mana Ka Pu’uwai outrigger canoe club and became a competitive canoe racer. He now lives in Duluth, Minnesota, where he is learning how to stay upright on cross-country skis. Project Namahana is his first novel.

“An enthralling tale of disappearances, deaths, dark secrets, and corporate evil. I loved it and highly recommend it!”
—Douglas Preston, #1 bestselling co-author of the Agent Pendergast series

“A smart, propulsive, high-stakes dive into the wild heart of Kaua‘i. A stunning debut from a writer I’ll be reading again.”
—James A. McLaughlin, Edgar Award winning author of Bearskin