You Are a Star, Ruth Bader Ginsburg (Paperback) 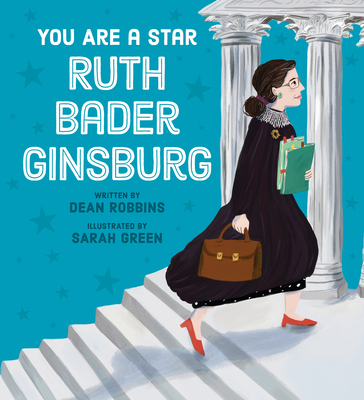 You Are a Star, Ruth Bader Ginsburg (Paperback)

Using a unique mix of first-person narrative, hilarious comic panels, and essential facts, Dean Robbins introduces young readers to an American trailblazer. The first book in an exciting new nonfiction series, You Are a Star, Ruth Bader Ginsburg focuses on Ruth's lifelong mission to bring equality and justice to all. Sarah Green's spot-on comic illustrations bring this icon to life, and engaging back matter instructs readers on how to be more like Ruth!

Sarah Green is an illustrator and designer based in San Francisco. She is the illustrator of several books for young readers, including Anna Strong: A Spy During the American Revolution by Sarah Glenn Marsh, The Fight of the Century: Alice Paul Battles Woodrow Wilson for the Vote by Barb Rosenstock, and Elizabeth Warren: Nevertheless, She Persisted by Susan Wood, among others. Learn more at sarahgreenillustration.com.
Dean Robbins is a journalist and the author of the children’s picture books Two Friends: Susan B. Anthony and Frederick Douglass, Margaret and the Moon: How Margaret Hamilton Saved the First Lunar Landing, and Miss Paul and the President: The Creative Campaign for Women's Right to Vote. His award-winning books have received starred reviews in Publishers Weekly and Kirkus Reviews and have been praised in the New York Times and USA Today. Dean grew up idolizing Apollo astronauts and loved working with Alan Bean on The Astronaut Who Painted the Moon. Learn more at deanrobbins.net.

Praise for You Are a Star, Ruth Bader Ginsburg:

"Can there be too many biographies of Ruth Bader Ginsburg? Robbins' contribution assures us the answer is no. ...Colorful and expressive." --Booklist