The Dinky Donkey: A Board Book (Board book) 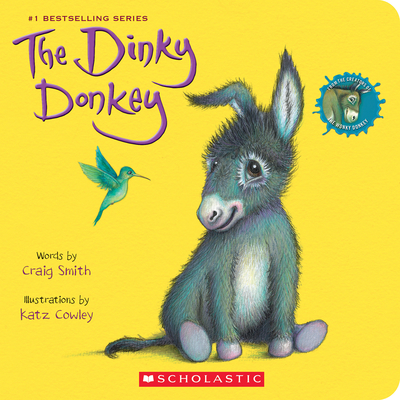 The Dinky Donkey: A Board Book (Board book)


On Our Shelves Now. Click on title for location specific availability.
The Wonky Donkey has a daughter in this hilarious sequel to the runaway hit, now available as a board book!

Wonky Donkey had a child,

it was a little girl.

The laugh-out-loud follow-up to the viral sensation The Wonky Donkey is finally here! Featuring playful verses by Craig Smith and charming illustrations by Katz Cowley, The Dinky Donkey follows the same formula that made its predecessor a worldwide hit. Readers will love the antics of this stinky punky plinky-plonky winky-tinky pinky funky blinky dinky donkey!

The Dinky Donkey is now available as a board book, allowing the very youngest children to join in the fun.

Craig Smith is the recipient of the 2008 APRA Children's Song of the Year for The Wonky Donkey. When not writing, Craig works as a musician and entertainer. Visit him at craigsmith.co.nz.
Katz Cowley is an illustrator and teacher who leads workshops in drawing, creative journaling, and self-expression.
★ "Should be packaged with an oxygen supply, as it will incontestably elicit uncontrollable gales of giggles." -- Kirkus Reviews, starred review