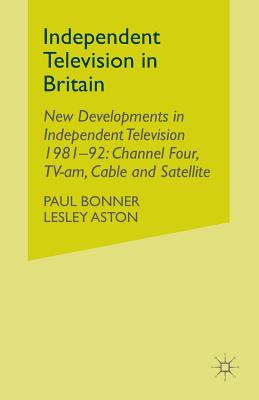 
Not on our shelves. Usually ships in 2-5 days.
(This book is nonreturnable. Nonreturnable books may take up to 3 weeks to ship. All sales final.)
Introduction PART ONE: CHANNEL 4 The Fourth Channel: Conception to Birth Countdown to Countdown: Setting up the Channel and Getting on the Air Programmes, Reactions and Progress 1982-87: 'The Isaacs Years' Politics, Scheduling and Selling 1988-1992: 'The Grade Years' PART TWO: TV-AM Breakfast-time Contract: TV-am Financing, Ratings and Resignation Dyke to the Rescue Wizard of Oz From Packer to Bond Exit TV-am PART THREE: OTHER RESPONSIBILITIES OF THE ITC Cable and Satellite.
PAUL BONNER worked in broadcasting for 40 years. He was at ITV for seven years - first as Director of the Programming Secretariat (Chairman of the Network Controllers Group) from 1987-1992, and then as a director at the new ITV Network Centre from 1993 until he retired two years later. Previously, he had been selected to be Channel Four's first Controller of Programmes. He held that post for the first seven years of the Channel's existence. Before that he had worked for the BBC in radio and television for 25 years. He spent ten of those years as a documentary maker. That was followed by a period in charge of the BBC's controversial public-access programmes. Paul Bonner's final role at the BBC was as head of its Science and Features Department. LESLEY ASTON was Press Officer at the IBA/ITC from 1983-1994, with a special interest in research. She was seconded to the Director General's Office from 1989-1990 to work on the Broadcasting Bill. Previously, she was in the industries section of the Economist Intelligence Unit and Manager of Information Services at Urwick Orr and Partners.