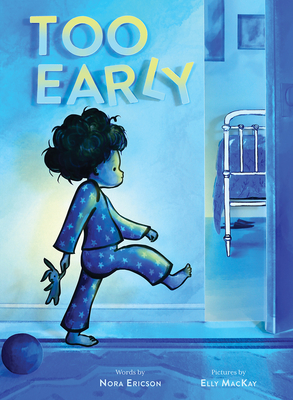 
On Our Shelves Now
A gentle, cozy story following a family’s bleary-eyed wake-up routine, a little one who’s eager to start the day, and the quiet magic of early mornings

I wake up very early.
Good morning, Sun, on your way at last. You don’t wake up nearly as early as I do.

Now the wind is waking.
Tickle tickle on my cheeks,
rustle rustle through the leaves.

Birds untuck and start to coo,
Whooo whooo, you wake up too early, yes you doooo . . .

In sweet, melodic verse written from the perspective of the earliest riser, Too Early follows a family's morning routine, exploring both the groggy haze and the everyday magic inherent in the predawn hours of a loving household.
Nora Ericson studied painting at Yale University and writing for children at Vermont College of Fine Arts. Originally from central New York, she now lives in Portland, Oregon, with two kids, two dogs, and two cats. Besides reading and writing, she loves cooking, tromping in the woods, and whittling spoons while daydreaming of her future miniature donkey farm. She’s also the author of Dill & Bizzy: An Odd Duck and a Strange Bird and Dill & Bizzy: Opposite Day. Elly MacKay is an internationally recognized paper artist and children's book author and illustrator. She wrote and illustrated the picture books Red Sky at Night, If You Hold a Seed, and Butterfly Park, among others. The distinctive three-dimensional quality in her works is made by setting up layers of painted paper in a miniature theater. She lights the scene and photographs it to create her unique illustrations. MacKay lives in Owen Sound, Ontario, with her family.

**STARRED REVIEW**
"Images of the closely cuddled duo make it clear that though the father grumbles ('You sure do wake up early'), sunrise and a shooting star—and fleeting one-on-one time—represent a gift in the ordinary moments before a day’s 'rush rush.'" —Publishers Weekly

**STARRED REVIEW**
"The wonderful and familiar details, such as the hallway night light, the half-dozing/half-awake shuffle of the father before the coffee kicks in, and the doggies doing their morning upward and downward stretches, bring the morning to life." —School Library Journal

**STARRED REVIEW**
"Perfectly capturing the magical essence of this liminal time of the day. Fellow early risers may be inspired to sit out on the porch with a warm mug of milk."—The Bulletin of the Center for Children's Books