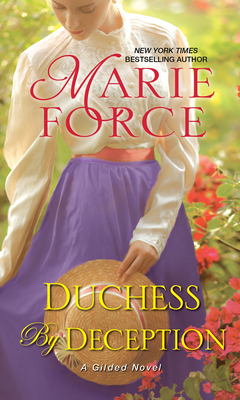 This is book number 1 in the Gilded series.

For fans of HBO’s The Gilded Age, explore the dazzling world of America’s 19th century elite in this lush series of sparkling, page-turning love stories…

In New York Times bestselling author Marie Force’s dazzling historical romance debut, the clock is ticking for a wealthy Duke who must marry by his thirtieth birthday—or lose his title . . .

Derek Eagan, the dashing Duke of Westwood, is well aware of his looming deadline. But weary of tiresome debutantes, he seeks a respite at his country home in Essex—and encounters a man digging on his property. Except he’s not a man. He’s a very lovely woman. Who suddenly faints at his feet.

Catherine McCabe’s disdain for the aristocracy has already led her to flee an arranged marriage with a boorish Viscount. The last thing she wants is to be waylaid in a Duke’s home. Yet, she is compelled to stay by the handsome, thoughtful man who introduces himself as the Duke’s estate manager.

Derek realizes two things immediately: he is captivated by her delicate beauty, and to figure out what she was up to, Catherine must not know he is the Duke. But as they fall passionately in love, Derek’s lie spins out of control. Will their bond survive his deception, not to mention the scorned Viscount’s pursuit? Most important, can Catherine fall in love all over again—this time with the Duke?

An Official Military Spouse Book Club Pick
Marie Force is the New York Times bestselling author of more than 70 contemporary romances, including the Gansett Island Series and the Fatal Series from Harlequin Books. In addition, she is the author of the Butler,Vermont Series, the Green Mountain Series and the erotic romance Quantum Series. All together, her books have sold 6 million copies worldwide. Her goals in life are simple—to finish raising two happy, healthy, productive young adults, to keep writing books for as long as she possibly can, and to never be on a flight that makes the news. Please visit her online at marieforce.com.
Praise for Duchess by Deception by Marie Force:

“Force has crafted a masterpiece with the perfect amount of romance.”
—Publishers Weekly, STARRED REVIEW