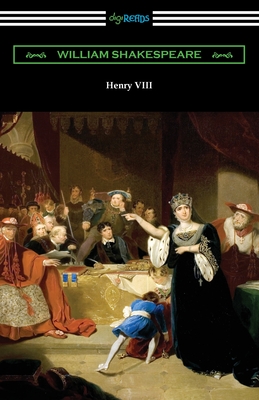 "Henry VIII" is one of the last plays by William Shakespeare and is considered to be among his finest historical dramas. The play was likely written sometime between the death of Queen Elizabeth I in 1603 and the burning of the original Globe Theatre in 1613, as "Henry VIII" was being performed the night of the fire when a canon shot for special effects set the theatre's thatched roof alight. The play appeared in print for the first time in the "First Folio" in 1623 and focuses on the life and times of Henry VIII, one of England's most dynamic rulers. The play examines and dramatizes monarchical life of 16th century England and the plot focuses on the events of King Henry VIII's annulment of his marriage to Katherine of Aragon and engagement to Ann Boleyn. The play portrays the suppression of the Protestant Reformation and the split of the Anglican and Catholic churches in England with riveting drama and dialogue. In Shakespeare's "Henry VIII", religious power and political desire merge, resulting in an engrossing historical tale. This edition is printed on premium acid-free paper, includes annotations by Henry N. Hudson, and an introduction by Charles Harold Herford.