The Contagion of Liberty: The Politics of Smallpox in the American Revolution (Hardcover) 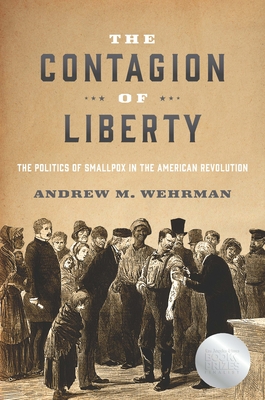 The Contagion of Liberty: The Politics of Smallpox in the American Revolution (Hardcover)

A timely and fascinating account of the raucous public demand for smallpox inoculation during the American Revolution and the origin of vaccination in the United States.

The Revolutionary War broke out during a smallpox epidemic, and in response, General George Washington ordered the inoculation of the Continental Army. But Washington did not have to convince fearful colonists to protect themselves against smallpox--they were the ones demanding it. In The Contagion of Liberty, Andrew M. Wehrman describes a revolution within a revolution, where the violent insistence for freedom from disease ultimately helped American colonists achieve independence from Great Britain.

Inoculation, a shocking procedure introduced to America by an enslaved African, became the most sought-after medical procedure of the eighteenth century. The difficulty lay in providing it to all Americans and not just the fortunate few. Across the colonies, poor Americans rioted for equal access to medicine, while cities and towns shut down for quarantines. In Marblehead, Massachusetts, sailors burned down an expensive private hospital just weeks after the Boston Tea Party.

This thought-provoking history offers a new dimension to our understanding of both the American Revolution and the origins of public health in the United States. The miraculous discovery of vaccination in the early 1800s posed new challenges that upended the revolutionaries' dream of disease eradication, and Wehrman reveals that the quintessentially American rejection of universal health care systems has deeper roots than previously known. During a time when some of the loudest voices in the United States are those clamoring against efforts to vaccinate, this richly documented book will appeal to anyone interested in the history of medicine and politics, or who has questioned government action (or lack thereof) during a pandemic.

Andrew M. Wehrman is an associate professor of history at Central Michigan University. A winner of the Walter Muir Whitehill Prize in Early American History, his writing has appeared in The New England Quarterly, The Boston Globe, and The Washington Post.