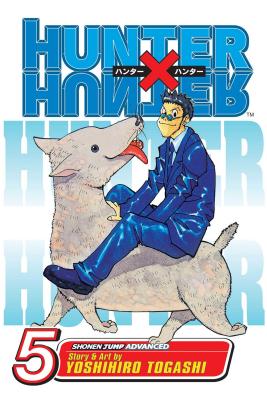 This is book number 5 in the Hunter X Hunter series.

Gon's new friend Killua may have run away from home, but that doesn't mean his family is willing to let him leave. Killua's parents sent his older brother Illumi to keep an eye on him during the Hunter Exam, and now Illumi has convinced Killua to return to the family business of assassination. Gon is convinced that Killua must have been brainwashed, and sets out with Leorio and Kurapika to make an intervention. But before the newly licensed Hunters can try to talk some sense into Killua, they have to make it past the unstoppable guard beast that is trained to eat all visitors!
Yoshihiro Togashi's manga career began in 1986 at the age of 20, when he won the coveted Osamu Tezuka Award for new manga artists. He debuted in the Japanese Weekly Shonen Jump magazine in 1989 with the romantic comedy Tende Shôwaru Cupid. From 1990 to 1994 he wrote and drew the hit manga YuYu Hakusho, which was followed by the dark comedy science-fiction series Level E and the adventure series Hunter x Hunter. In 1999 he married the manga artist Naoko Takeuchi.