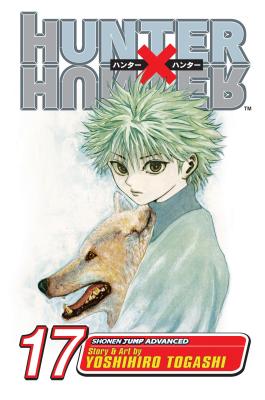 This is book number 17 in the Hunter X Hunter series.

In an unexpected turn of events, Gon, Killua, and their sometime enemy Hisoka pull off a stunning victory in a heated game of deadly dodge ball, working together to defeat Razor and his 14 Devils. Meanwhile, a group of rival Hunters zap out for a meeting with the billionaire benefactor who has hired numerous hunters, including Gon, to solve the Greed Island game. There they make a shocking discovery that may very well make all of their struggles meaningless!
Yoshihiro Togashi's manga career began in 1986 at the age of 20, when he won the coveted Osamu Tezuka Award for new manga artists. He debuted in the Japanese Weekly Shonen Jump magazine in 1989 with the romantic comedy Tende ShÃ´waru Cupid. From 1990 to 1994 he wrote and drew the hit manga YuYu Hakusho, which was followed by the dark comedy science-fiction series Level E and the adventure series Hunter x Hunter. In 1999 he married the manga artist Naoko Takeuchi.