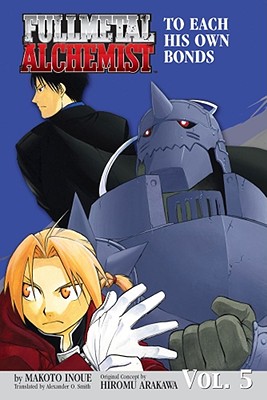 This is book number 5 in the Fullmetal Alchemist (Novel) series.

Somewhere between magic, art and science exists a world of alchemy. And into this world travel Edward and Alphonse Elric—two brothers in search of the Philosopher's Stone, the ultimate alchemical treasure!You've read the manga and seen the anime. Complete the Fullmetal experience with these best-selling novels featuring original stories.

During a recent visit with their former teacher Izumi Curtis, the Elric brothers discover the existence of a particular book--a book so dangerous that it remains against the law to even print it! Curious, Edward and Alphonse set out to locate this unique and rare tome. On their journey they encounter a young Ishbalan child and his foster mother. Seeing them reminds the brothers of their own mother who died of a fatal illness.

Meanwhile, Roy Mustang, who was recently promoted to duty in Central City, investigates a puzzling case involving synthetic beasts known as chimeras. During the investigation, Mustang bumps into someone from his past--someone he never thought he'd see again!