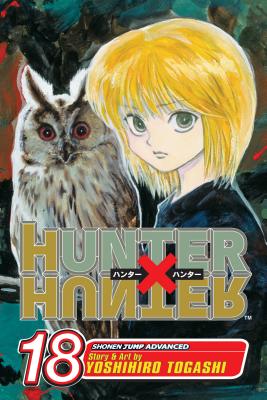 This is book number 18 in the Hunter X Hunter series.

Killua and Biscuit take on two Bombers in a fisticuff competition, and during the fight, Biscuit reveals her true shocking form! Meanwhile, Gon is set on getting revenge on Genthru no matter what the cost--including his own body parts! Afterwards a strange event is triggered due to Gon having 99 cards--it's a multiple-choice quiz! But just what is the quiz about, and more importantly what can the prize possibly be?!
Yoshihiro Togashi's manga career began in 1986 at the age of 20, when he won the coveted Osamu Tezuka Award for new manga artists. He debuted in the Japanese Weekly Shonen Jump magazine in 1989 with the romantic comedy Tende ShÃ´waru Cupid. From 1990 to 1994 he wrote and drew the hit manga YuYu Hakusho, which was followed by the dark comedy science-fiction series Level E and the adventure series Hunter x Hunter. In 1999 he married the manga artist Naoko Takeuchi.