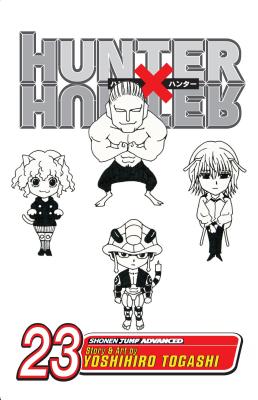 This is book number 23 in the Hunter X Hunter series.

Killua is under attack!! Confronted with a sniper that's shooting Flea-Bullets from afar, Killua must predict where the next shot will hit or fall victim to the fleas that are draining all his blood. But there are more surprises in store as other snipers aim to take a shot at him. Being a human dartboard was not on today's to-do list! Meanwhile, Gon's silent stalker finally reveals himself...with a proposition Gon never expected!
Yoshihiro Togashi's manga career began in 1986 at the age of 20, when he won the coveted Osamu Tezuka Award for new manga artists. He debuted in the Japanese Weekly Shonen Jump magazine in 1989 with the romantic comedy Tende ShÃ´waru Cupid. From 1990 to 1994 he wrote and drew the hit manga YuYu Hakusho, which was followed by the dark comedy science-fiction series Level E and the adventure series Hunter x Hunter. In 1999 he married the manga artist Naoko Takeuchi.