The Story of Saiunkoku, Volume 3 (Paperback) 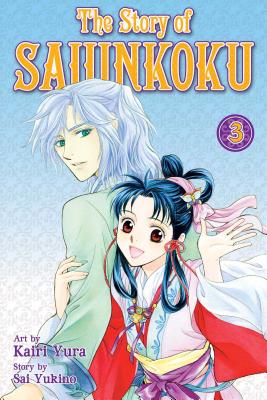 The Story of Saiunkoku, Volume 3 (Paperback)

This is book number 3 in the Story of Saiunkoku series.

A period fantasy in which a palace consort must guide a feckless emporer to assume the throne. Shurei Hong, destitute but of noble birth, has always dreamed of working as a civil servant in the imperial court of Saiunkoku, but women are barred from holding office. The emperor Ryuki, however, refuses to take command, leaving everything to his advisors. Shurei is asked to become a consort to the emperor to persuade the ne'er-do-well ruler to govern. Shurei has returned to her normal life at home, but once more the palace finds itself in need. She is asked to work as an assistant in the Ministry of the Treasury, but as women aren't allowed in, Shurei must pretend to be a boy.
Kairi Yura was born on January 16. She is the illustrator of both the manga and the YA novels for The Story of Saiunkoku. She is also the creator of the Angelique series. Yura's hobby is going to the theater. Sai Yukino was born on January 26. She is author of both the manga and YA novels for The Story of Saiunkoku. She received an honorable mention and the Readers' Award for Kadokawa's Beans Novel Taisho Awards. When shes not busy writing, Yukino enjoys massages.