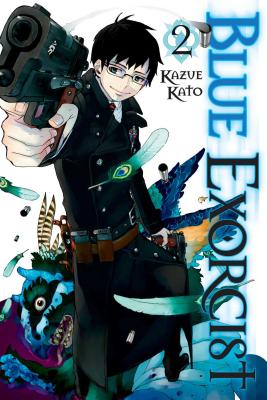 This is book number 2 in the Blue Exorcist series.

Shocked by the death of his foster father and the revelation that his real father is the demon lord Satan, Rin Okumura enters the True Cross Academy to learn to be an exorcist. But every great exorcist has to start somewhere, and for the students of the academy the first step is the Exwire examination. To prepare for the exam, the new pages in Yukio’s class must undergo intensive training. Rin and his classmates have their hands full when a demon appears, but is this a test or something more sinister?
Manga creator and illustrator Kazue Kato was born in Tokyo on July 20. In 2000, she won the prestigious Tezuka Award for her work Boku to Usagi (The Rabbit and Me) published in Akamaru Jump. From 2005 to 2006 her series Robo to Usakichi, a sci-fi adventure featuring a rabbit (again!) was published in the monthly magazine Shonen Sirius (Kodansha).