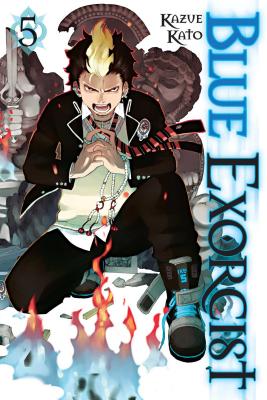 This is book number 5 in the Blue Exorcist series.

In the late Edo Period, a demon known as the Impure King killed thousands of people. After defeating the demon, the Knights of the True Cross kept its left eye safely sealed away on Academy grounds—but now someone has stolen it! Hearing the thief has taken a child hostage, Yukio and Rin go to help. The investigation and pursuit will lead Rin and his friends to Kyoto and involve them even deeper in a sinister plot! But will his friends’ knowledge that Rin is the son of Satan drive a wedge between them?
Manga creator and illustrator Kazue Kato was born in Tokyo on July 20. In 2000, she won the prestigious Tezuka Award for her work Boku to Usagi (The Rabbit and Me) published in Akamaru Jump. From 2005 to 2006 her series Robo to Usakichi, a sci-fi adventure featuring a rabbit (again!) was published in the monthly magazine Shonen Sirius (Kodansha).