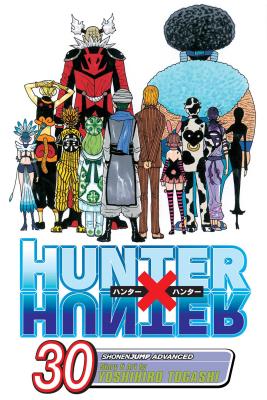 This is book number 30 in the Hunter X Hunter series.

All survivors gather for the final showdown between the Hunters and the Chimera Ants. But nothing is simple anymore. Loyalties on both sides are tested as humans prove themselves as ruthless as the Ants themselves. And as the Ant King’s memory returns, he finds himself unable to stop thinking about one insignificant human, the blind Gungi player Komugi…
Yoshihiro Togashi's manga career began in 1986 at the age of 20, when he won the coveted Osamu Tezuka Award for new manga artists. He debuted in the Japanese Weekly Shonen Jump magazine in 1989 with the romantic comedy Tende Shôwaru Cupid. From 1990 to 1994 he wrote and drew the hit manga YuYu Hakusho, which was followed by the dark comedy science-fiction series Level E and the adventure series Hunter x Hunter. In 1999 he married the manga artist Naoko Takeuchi.