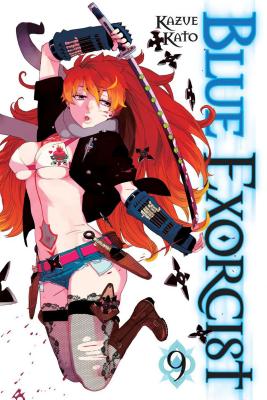 This is book number 9 in the Blue Exorcist series.

All of Rin’s friends have done their best to hold off the deadly Impure King so Rin can confront it. Now it’s entirely up to Rin to finish off the gigantic demon. Although Rin has finally drawn the Koma sword and found his confidence, that alone may not be enough to defeat the Impure King! And Yukio’s battle with the possessed Saburota Todo may have awakened something dark deep within him.
Manga creator and illustrator Kazue Kato was born in Tokyo on July 20. In 2000, she won the prestigious Tezuka Award for her work Boku to Usagi (The Rabbit and Me) published in Akamaru Jump. From 2005 to 2006 her series Robo to Usakichi, a sci-fi adventure featuring a rabbit (again!) was published in the monthly magazine Shonen Sirius (Kodansha).