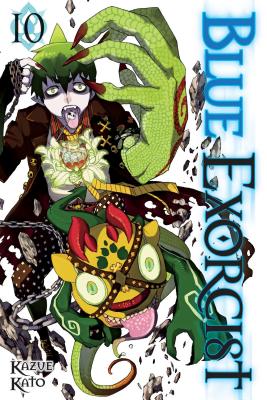 This is book number 10 in the Blue Exorcist series.

With the defeat of the Impure King, the Exwires have returned to their routine lives back at True Cross Academy--but the routine doesn't last for long! Halfway around the world, a strange encounter in the desert is the harbinger of evil things to come. An upturn in supernatural incidents at the academy involves Rin and his friends, but their seemingly simple tasks are about to draw them into a far larger conspiracy. Powerful forces have begun to awaken and an old enemy prepares for a new conflict.
Manga creator and illustrator Kazue Kato was born in Tokyo on July 20. In 2000, she won the prestigious Tezuka Award for her work Boku to Usagi (The Rabbit and Me) published in Akamaru Jump. From 2005 to 2006 her series Robo to Usakichi, a sci-fi adventure featuring a rabbit (again!) was published in the monthly magazine Shonen Sirius (Kodansha).