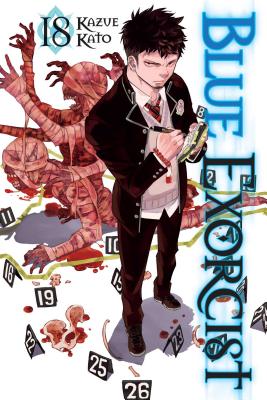 This is book number 18 in the Blue Exorcist series.

After dealing with the demons of Shura’s past, Shura, Rin and Yukio return to True Cross Academy. While Yukio recovers from his wounds, Rin and his friends get back to their lives. But trouble is brewing as the Illuminati continue to advance their plans. Lightning launches an investigation of the Illuminati, intending to get to the bottom of things. With Suguro in tow, he delves into the archives deep below True Cross Academy, where he may uncover secrets that were buried there for a reason…
Manga creator and illustrator Kazue Kato was born in Tokyo on July 20. In 2000, she won the prestigious Tezuka Award for her work Boku to Usagi (The Rabbit and Me) published in Akamaru Jump. From 2005 to 2006 her series Robo to Usakichi, a sci-fi adventure featuring a rabbit (again!) was published in the monthly magazine Shonen Sirius (Kodansha).