Clementine Friend of the Week (Paperback) 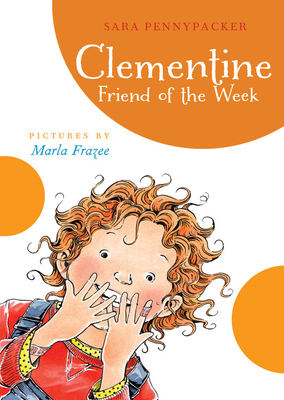 Clementine Friend of the Week (Paperback)

This is book number 4 in the Clementine series.

Clementine has been picked for Friend of the Week, which means she gets to be line leader, collect the milk money, and feed the fish. Even better, she'll get a Friend of the Week booklet, in which all the other third-grade kids will write why they like her.

Clementine's best friend Margaret has all sorts of crazy ideas for how Clementine can prove to the class she is a good friend. Clementine has to get a great booklet, so she does everything Margaret says she should do. But what begins as one of the best weeks ever starts turning into the worst, and being a good friend might turn out harder than Clementine thinks.
Sara Pennypacker splits her time between Florida and Massachusetts, were she feels lucky to be able to write every day. She is the author of many children's books, including Waylon! One Awesome Thing and Waylon! Even More Awesome, the New York Times #1 bestseller Pax; seven in the New York Times bestselling Clementine series; two in the Stuart series; Meet the Dullards; Summer of the Gypsy Moths; and Sparrow Girl. Her books have won numerous accolades, including a Golden Kite Award, a Christopher Award, and several children's choice state awards, and they have appeared on many Best Books of the Year lists. For more information, visit www.sarapennypacker.com.