Clementine and the Family Meeting (Paperback) 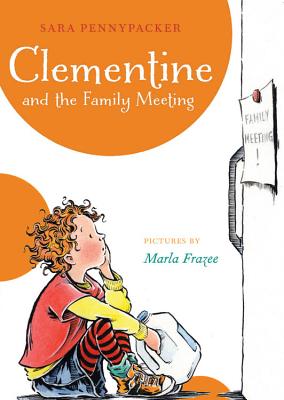 Clementine and the Family Meeting (Paperback)

This is book number 5 in the Clementine series.

Clementine's having a nervous breakdown. The FAMILY MEETING! sign is up in her house, and she just knows she's in trouble for something. Has she been too mean to her little brother? Too sloppy? Eating too much junk food? Try as she might to find out what's on the agenda, her parents won't reveal anything before the meeting.

As far as Clementine is concerned, the agenda should be something like: "We're getting a gorilla." But no, it's something entirely different. "We're talking about a new baby," says her father. "A sibling for you two. What do you think about that?" NO THANKS! is what Clementine thinks. After all, four is the perfect number for a family. There are four sides to a table, not five. Will Clementine learn to make room for one more?
Sara Pennypacker splits her time between Florida and Massachusetts, were she feels lucky to be able to write every day. She is the author of many children's books, including Waylon! One Awesome Thing and Waylon! Even More Awesome, the New York Times #1 bestseller Pax; seven in the New York Times bestselling Clementine series; two in the Stuart series; Meet the Dullards; Summer of the Gypsy Moths; and Sparrow Girl. Her books have won numerous accolades, including a Golden Kite Award, a Christopher Award, and several children's choice state awards, and they have appeared on many Best Books of the Year lists. For more information, visit www.sarapennypacker.com.