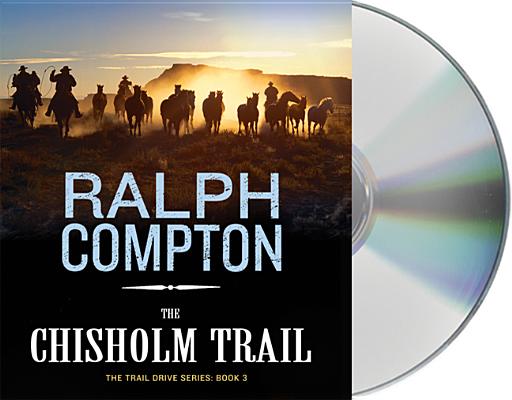 This is book number 3 in the The Trail Drive series.

Armed with only a Colt rifle, a Bowie knife, and courage as big as the West, Ten Chisholm—the bold, illegitimate son of frontier scout and plains ambassador Jesse Chisholm and a Cherokee woman—arrives in the heart of Comanche country with a price on his head. His only crime: loving the beautiful daughter of a powerful New Orleans gambler who has promised her to a wealthy man she hates.

Now that Ten has returned to the harsh Texas brakes with a team of battle-toughened cowboys and ex-soldiers—and a vow to return to Priscilla and make her his wife—he must round up wild longhorns, ward off angry Comanches, and survive treacherous outlaw attacks as he crosses the Red River and sets off on a brazen quest to open a new trail to Kansas on the savage frontier.

Ralph Compton stood six-foot-eight without his boots. His first novel in the Trail Drive series, The Goodnight Trail, was a finalist for the Western Writers of America Medicine Pipe Bearer Award for best debut novel. He was also the author of the Sundown Rider series and the Border Empire series. A native of St. Clair County, Alabama, Compton worked as a musician, a radio announcer, a songwriter, and a newspaper columnist before turning to writing westerns. He died in Nashville, Tennessee in 1998.

Scott Sowers has narrated numerous audiobooks, including books by Douglas Preston, Robert Ludlum, John Hart, and Nicholas Sparks. He was named the 2008 Best Voice in Mystery & Suspense by AudioFile magazine. AudioFile also awarded Sowers an Earphones Award for his narration of John Hart’s Down River, writing, “[providing] a bewitching rhythm and pace, expertly capturing and elevating this story of redemption. The combination of Hart and Sowers provides the perfect marriage of prose and voice. Together they enable the book to transcend genre fiction and become something exceptional.”

Sowers is also an accomplished actor of both stage and screen. His theater credits include roles in Inherit the Wind, A Streetcar Named Desire, Bus Stop, and A Few Good Men. His many television credits include guest roles on Law & Order, The Black Donnellys, Six Degrees, All My Children, and the Hallmark Channel’s Season for Miracles. He has also appeared in the films Trust the Man, The Village and The Ten.