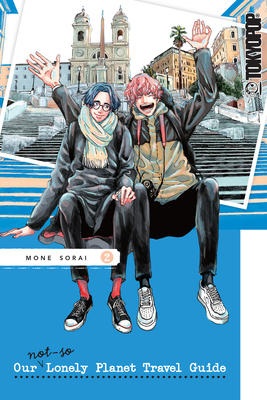 This is book number 2 in the Our Not-So-Lonely Planet Travel Guide series.

Super serious Asahi Suzumura and laidback, easygoing Mitsuki Sayama might seem like an odd couple, but they made a deal; they'll vacation around the world and when they get back to Japan, they'll get married.

As they travel from country to country, the different people, cultures and cuisine they encounter begin to bring them closer together. After all they're not just learning about the world, but about themselves too.

A prolific BL (yaoi) manga artist, Mone Sorai has also published under the name Avil Abey. She lives in Japan, and includes music, movies, flowers and taro as her favorite things.