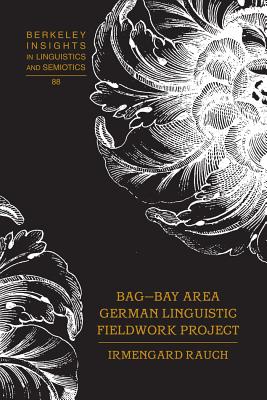 This is book number 88 in the Berkeley Insights in Linguistics and Semiotics series.

The sixteen chapters comprising this book on the Bay Area German Linguistic Fieldwork Project offer over twenty-five years of research into the changing language of native speakers and first-generation American-German speakers residing in the San Francisco Bay Area. Since 1984 the principal project investigator, Irmengard Rauch, together with students of Germanic linguistics at the University of California, Berkeley, has elicited and analyzed an array of linguistic phenomena that include politically correct (PC) German, the German language of vulgarity and civility, and the grammar of e-mailing and texting German as well as that of snail-mail German. Comparison data were also gathered from Berlin in the case of the PC German and from Bonn in the case of the vulgarity/civility project. In recording the sounds of spoken German in the Bay Area, the BAG fieldworkers interviewed not only German-speaking adults but also first-generation German-speaking children (yielding a Kinderlect ) to compare with the spoken English of both of these groups. Still other studies focus on the interplay among gesture, emotion, and language; canine-human communication; the architecture of the lie; and the architecture of the apology. Chapter one details the modus operandi of the BAG research project.
This book is useful for the study of the sociolinguistics of German, English-German bilingualism, general linguistics, and the methods of linguistic fieldwork.
Irmengard Rauch is Professor of Germanic Linguistics at the University of California, Berkeley. She is the author of The Old High German Diphthongization: A Description of a Phonemic Change; The Old Saxon Language: Grammar, Epic Narrative, Linguistic Interference; Semiotic Insights: The Data Do the Talking; The Phonology/Paraphonology Interface and the Sounds of German Across Time; The Gothic Language: Grammar, Genetic Provenance and Typology, Readings; and of numerous articles and chapters in professional journals and books. Rauch is co-editor of several collections of linguistics and semiotics research and is the Peter Lang series editor for Berkeley Insights in Linguistics and Semiotics and Berkeley Models of Grammars. She is founding editor of the Interdisciplinary Journal for Germanic Linguistics and Semiotic Analysis and the founder of the Semiotic Circle of California, the Berkeley Germanic Linguistics Roundtable, and the San Francisco Bay Area German Linguistic Fieldwork Project. Her honors include a Guggenheim and a Festschrift.