Flash and Bones: A Novel (A Temperance Brennan Novel) (CD-Audio) 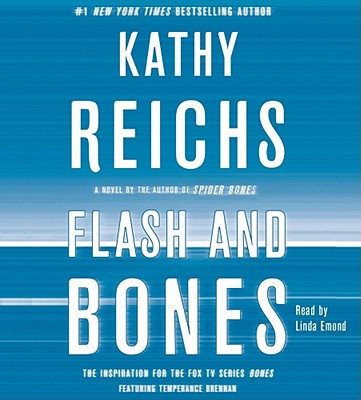 Flash and Bones: A Novel (A Temperance Brennan Novel) (CD-Audio)

Just as 200,000 fans are pouring into town for Race Week, a body is found in a barrel of asphalt next to the Charlotte Motor Speedway. The next day, a NASCAR crew member comes to Temperance Brennan’s office at the Mecklenburg County Medical Examiner to share a devastating story. Twelve years earlier, Wayne Gamble’s sister, Cindi, then a high school senior and aspiring racer, disappeared along with her boyfriend, Cale Lovette. Lovette kept company with a group of right-wing extremists known as the Patriot Posse. Could the body be Cindi’s? Or Cale’s?

At the time of their disappearance, the FBI joined the investigation, only to terminate it weeks later. Was there a cover-up? As Tempe juggles multiple theories, the discovery of a strange, deadly substance in the barrel alongside the body throws everything into question. Then an employee of the Centers for Disease Control and Prevention goes missing during Race Week. Tempe can’t overlook the coincidence. Was this man using his lab chemicals for murder? Or is the explanation even more sinister? What other secrets lurk behind the festive veneer of Race Week?

A turbocharged story of secrets and murder unfolds in this, the fourteenth thrilling novel in Reichs’s “cleverly plotted and expertly maintained series” (The New York Times Book Review). With the smash hit Bones about to enter its seventh season and in full syndication—and her most recent novel, Spider Bones, an instant New York Times bestseller—Kathy Reichs is at the top of her game.
Kathy Reichs’s first novel Déjà Dead, published in 1997, won the Ellis Award for Best First Novel and was an international bestseller. Cold, Cold Bones is Kathy’s twenty-first entry in her series featuring forensic anthropologist Temperance Brennan.  Kathy was also a producer of Fox Television’s longest running scripted drama, Bones, which was based on her work and her novels. One of very few forensic anthropologists certified by the American Board of Forensic Anthropology, Kathy divides her time between Charlotte, North Carolina, and Montreal, Québec. Visit her at KathyReichs.com or follow her on Twitter @KathyReichs.

Linda Emond has been nominated for three Tony Awards for her work in Cabaret, Death of a Salesman, and Life x 3. For her work off-Broadway, she is the recipient of a Lucille Lortel Award and an Obie. Television credits include Lodge 49, The Good Wife, Succession, and The Gilded Age. Film credits include Gemini Man, The Big Sick, Across the Universe, and Julie & Julia.

"I love a good mystery and have been fascinated by forensic science long before starting work on the show Bones. So I am a big fan of Kathy's books. I love the character of Temperance Brennan, her strong spirit and intelligence, and the humor in the book series."—Emily Deschanel

“Reichs imbues this fusion of past and present with her signature blend of forensic know-how and deeply felt characters.”—Publishers Weekly

“Reichs knows what her readers like, and she has another hit with Flash and Bones…a compelling read that will appeal to anyone who likes reading forensic thrillers.”—Associated Press

“A fine entry in a consistently solid series.”—Booklist

“Reichs has crafted a novel likely to appeal to NASCAR lovers as well as thriller aficionados.”—Charlotte Observer