I Sense a Coldness to Your Mentoring: A Dilbert Book (Paperback) 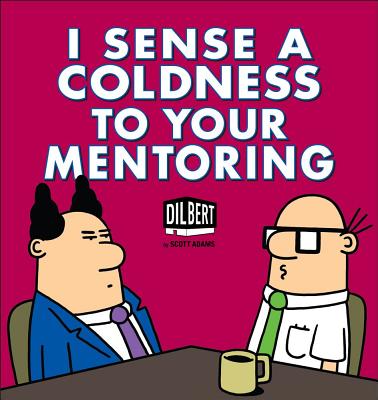 I Sense a Coldness to Your Mentoring: A Dilbert Book (Paperback)

This is book number 41 in the Dilbert series.

Dilbert is the most photocopied, pinned-up, downloaded, faxed, and e-mailed comic strip in the world. Dubbed "the cartoon hero of the workplace" by the San Francisco Examiner, Dilbert has been syndicated since 1989 and now appears in 2,000 newspapers in 65 countries and 25 languages.

The boss. Everyone has one, and all of every boss's worst traits are embodied in The Boss in Dilbert.

In I Sense a Coldness to Your Mentoring, the ongoing torture that The Boss wreaks on his helpless underlings is played out in full. From a total lack of mentoring skills to clueless budget requests and pointless, mind-numbing endless meetings, The Boss makes office life for Dilbert, Wally, Alice, and his secretary a living hell with cubicle walls.
What started as a doodle has turned Scott Adams into a superstar of the cartoon world. Dilbert debuted on the comics page in 1989, while Adams was in the tech department at Pacific Bell. Adams continued to work at Pacific Bell until he was voluntarily downsized in 1995. He has lived in the San Francisco Bay Area since 1979.
... the unending comic-strip frustrations faced by Dilbert and his coworkers help relieve the real-world frustrations of untold numbers of office workers around the world — and Adams' consistency in providing that sort of pressure-release valve for the workplace is a singular service that also has the distinction of being amazingly funny an amazingly high percentage of the time.  (Infodad.com)