Some Kind of Peace: A Novel (Paperback) 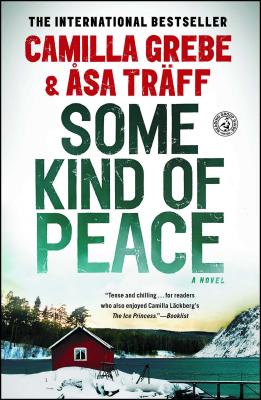 Some Kind of Peace: A Novel (Paperback)

“The intensity of Scandinavian crime fiction, its intimacy and human scale, is impressively on display in this novel by Swedish sisters Grebe and Traff. I often feel freezing when reading a thriller from the North, but from the very first page, this compelling fiction paints a warm and lively portrait of a Swedish summer, its beauty and lighthearted spirit, its customary celebrations - so ironic a background for a dark, wrenching, and compelling story.”
— Barbara Peters, The Poisoned Pen, Scottsdale, AZ

SOMEONE IS WATCHING SIRI BERGMAN.

A thirty-four-year-old psychologist with a troubled past, Siri Bergman works in central Stockholm and lives alone in an isolated cottage outside the city. Terrified of the dark, she leaves all the lights on when she goes to bed—after having a few glasses of wine to calm her nerves—but she can’t shake the feeling that someone is spying on her through the blackened windows.

When the lifeless body of Sara Matteus—a young patient of Siri’s with a history of drug addiction and sexual abuse—is found floating in the water near the cottage, Siri can no longer deny that someone is out there, watching her and waiting. With the help of Markus, the young policeman investigating Sara’s death; Vijay, an old friend and psychology professor; and Aina, her best friend, Siri sets out to catch the murderer and finally put her past to rest. But as their investigation unfolds, virtually everyone Siri trusts will become a potential suspect.
Camilla Grebe is a graduate of the Stockholm School of Economics. She was a cofounder of Storyside, a Swedish audiobook publisher, where she was both CEO and publisher during the early 2000s. She lives in Stockholm, Sweden.

Åsa Träff is a psychologist specializing in cognitive behavioral therapy. She runs a private practice with her husband. She lives in Älvsjö, Sweden.
“This powerful first in a new thriller series from Swedish sisters Grebe and Träff introduces a delightfully flawed heroine . . . The action moves swiftly to a surprising climax.”
— Publishers Weekly (Starred Review, PW Pick of the Week)

"Tense and chilling, this is a thriller for readers who also enjoyed Camilla Lackberg’s The Ice Princess."
— Booklist

"Sisters Camilla Grebe and Åsa Träff dig deep into the cold climes of the human heart in this sharp, atmospheric thriller. First rate writing and unusually absorbing characters. Loved this book.”
— Perri O'Shaughnessy, bestselling author of Unlucky in Law and Show No Fear

"Some Kind of Peace is a fast-moving psychological thriller whose plot unfolds from the authors' expert and sensitive consideration of character. Dr. Siri Bergman, haunted by her own loss, finds herself in the midst of danger, the threat coming from a number of possible suspects. Camilla Grebe and Åsa Träff spin a tantalizing story of menace and longing in this provocative and richly rendered novel."
— Lee Martin, author of Break the Skin and The Bright Forever

“Grebe and Träff break new ground in the Scandinavian crime literature genre, and they do it brilliantly. Using unique insights and experiences from their own professional backgrounds, they tell a smooth-paced yet utterly intriguing story about man’s inability to let go of the past.” ­
— Kristina Ohlsson, author of Unwanted