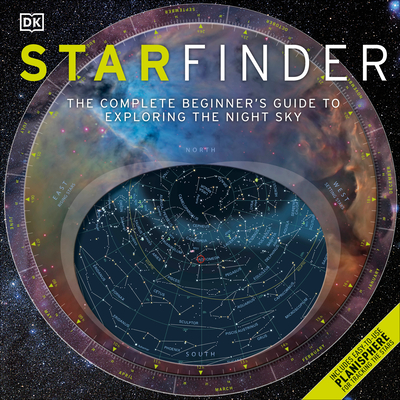 
On Our Shelves Now. Click on title for location specific availability.
Now with removable planisphere!

Starfinder lays out the universe clearly, highlighting the signposts in the sky and explaining the cosmology of the stars. Discover the wonders of the night sky with up-to-date information about the universe, including monthly charts to both the northern and southern hemisphere, and a section on observing the Moon, planets, and other bodies of the solar system.

Carole Stott has 20 years of experience as an astronomer, and has served as the curator of astronomy and the head of the observatory for the Royal Observatory in England. She is the author of Eyewitness: Space Exploration, Eye Wonder: Space, I Wonder Why Stars Twinkle, and Celestial Charts: Antique Maps of the Heavens.Giles Sparrow studied astronomy at University College London and science communication at Imperial College, London, and is a bestselling science and astronomy author. His books include Cosmos, Spaceflight, The Universe in 100 Key Discoveries, and Physics in Minutes, as well as contributions to DK books, such as Universe and Space.
"[C]an help you see stars — and a whole lot more. The cover states it's for beginners, but this book also covers the solar system, dozens of constellations and monthly star guides. Because it's DK, it's richly illustrated and aimed right at third graders and older, along with their parents." – Raising Arizona Kids