Happy Bonsai: Choose It, Shape It, Love It (Hardcover) 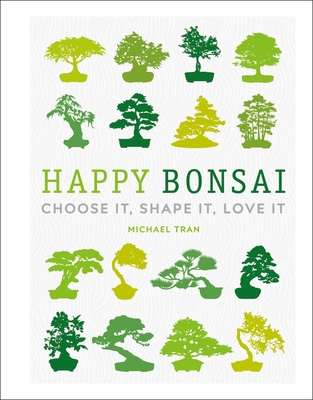 Happy Bonsai: Choose It, Shape It, Love It (Hardcover)


On Our Shelves Now. Click on title for location specific availability.
Begin your lifelong love affair with the mindful art of bonsai.

Do you know your shari from your nebari? Can you tell literati styling from informal upright? Want to know how to create that gnarled and twisted look?

Let Happy Bonsai guide you along the path to enlightenment, with care and display profiles for 40 top trees and fully illustrated step-by-steps of more than 20 bonsai techniques and styles.

Find your perfect tree and discover how to prune, shape, and tend to its needs to create a beautiful living sculpture. Fall in love with this most meditative of garden crafts.
Michael Tran owns and runs his own bonsai nursery in Germany, where he specializes in European bonsai species. Born in 1982, he began his bonsai training with Mr. Udo Fischer and had the chance to meet and learn from Japanese masters while under his wing. After two years he became self-taught, and his mastery of bonsai at a young age led him to be called a prodigy. Today he is honored to have some of Europe's oldest, prize-winning masterpieces in his care, which have been passed down to him from the first generation of European bonsai practitioners. Michael has published many articles in bonsai magazines and gives lectures, workshops, and demonstrations all over Europe.