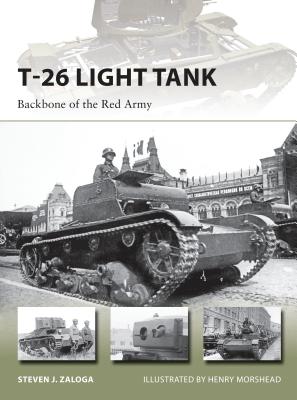 This is book number 218 in the New Vanguard series.

This book surveys the development of the T-26 as well as its combat record in the Spanish Civil War, the war in China, the border wars with Poland and Finland in 1939-40, and the disastrous battles of 1941 during Operation Barbarossa.

The T-26 was the first major Soviet program of the 1930s, beginning as a license-built version of the British Vickers 6-ton export tank. Although the T-26 retained the basic Vickers hull and suspension, the Red Army began to make extensive changes to the turret and armament, starting with the addition of a 45mm tank gun in 1933. The T-26 was built in larger numbers than any other tank prior to World War II. Indeed, more T-26 tanks were manufactured than the combined tank production of Germany, France, Britain, and the United States in 1931-40.

“New Vanguard continues its track record of producing high quality and useful publications, not only for the buff, but the serious historian as well. This is a nice addition for anyone interested in Soviet armor and is highly recommended.” —Marc Blackburn, IPMS/USA