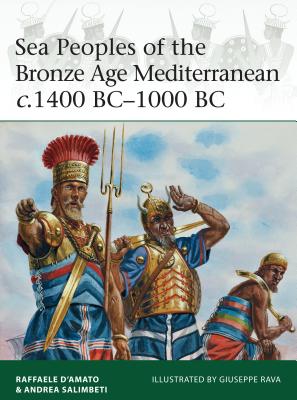 This is book number 204 in the Elite series.

Sea Peoples of the Bronze Age and Mediterranean features the latest historical and archaeological research into the mysterious and powerful confederations of raiders who troubled the Eastern Mediterranean in the last half of the Bronze Age. Research into the origins of the so-called Shardana, Shekelesh, Danuna, Lukka, Peleset and other peoples is a detective 'work in progress'. However, it is known that they both provided the Egyptian pharaohs with mercenaries, and were listed among Egypt's enemies and invaders. They contributed to the collapse of several civilizations through their dreaded piracy and raids, and their waves of attacks were followed by major migrations that changed the face of this region, from modern Libya and Cyprus to the Aegean, mainland Greece, Lebanon and Anatolian Turkey. Drawing on carved inscriptions and papyrus documents - mainly from Egypt - dating from the 15th-11th centuries BC, as well as carved reliefs of Medinet Habu, this title reconstructs the formidable appearance and even the tactics of the famous 'Sea Peoples'.
Raffaele D'Amato, PhD, is the author of some 40 books and numerous articles on the military of Ancient Greece, the Roman Empire including Byzantium, and medieval Europe. He has taught at the University of Ferrara, and for two years as a visiting professor at Fatih University, Istanbul. He currently lives in England, working as an archaeological consultant and lawyer for Timeline Auctions Ltd of Harwich, and also as an external researcher for the Laboratory of the Danubian Provinces at the University of Ferrara.