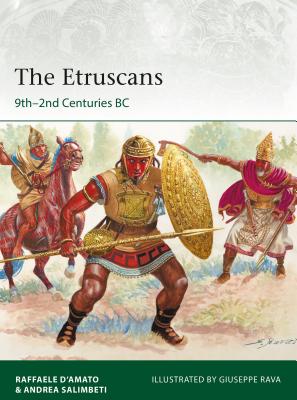 This is book number 223 in the Elite series.

Ancient Rome had deep roots in the "Villanovan" culture that we call today the Etruscans. Their long-lived civilization can be traced to 900--750 BC in northwest Italy. They were a sea-faring people trading with and competing against Greek and Phoenician peoples, including the Carthaginians. They were also a great land-based power, especially in the "Classical" period, where they expanded their power north into the Po Valley and south to Latium. In the 6th century BC an Etruscan dynasty ruled Rome, and their power extended southwards to the Amalfi coast. In 509 BC the Romans rose up to expel their kings, which began the long "Etruscan twilight" when their power was squeezed by the Samnites and, most especially, the Romans.

Drawing on archeological evidence including warrior tombs, paintings, sculptures, and fully illustrated throughout, this study examines one of the early rivals to Ancient Rome.

Raffaele D'Amato, PhD, is the author of some 40 books and numerous articles on the military of Ancient Greece, the Roman Empire including Byzantium, and medieval Europe. He has taught at the University of Ferrara, and for two years as a visiting professor at Fatih University, Istanbul. He currently lives in England, working as an archaeological consultant and lawyer for Timeline Auctions Ltd of Harwich, and also as an external researcher for the Laboratory of the Danubian Provinces at the University of Ferrara.

"I can happily recommend this publication for anyone interested in ancient history and the fascinating people living in it." - IPMS / USA